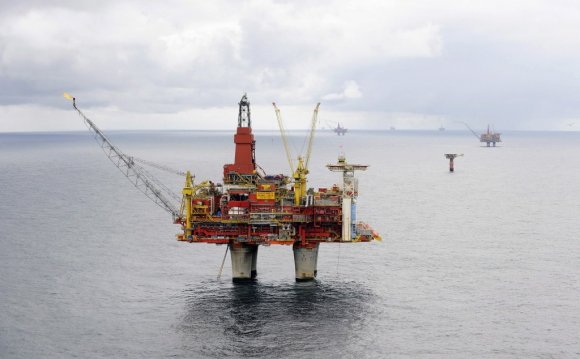 A giant wave slammed into Norwegian oil rig COSL Innovator in the North Sea on Wednesday evening, killing one person. The rig is now heading toward the coast, with workers being evacuated.

The fatal accident happened during a storm in the Troll oil field off the coast of Bergen, an area hit by extreme weather conditions on Wednesday, with waves up to 14 meters high.

The victim was a man in his 50s from eastern Norway, according to operation leader Tor Helge Stavik of Rogaland Police District, who was speaking to NRK.

“It is incredibly sad to hear this news. We are concerned with taking care of those affected, ” said press chief Morten Eek of oil company Statoil, which holds the license for drilling in the region.

The accident occurred when a wave crashed into the accommodation section of the platform.

A coast guard helicopter as well as a rescue helicopter owned by Statoil transported the injured to the mainland, reports NRK. Forty-four of the 106 people on the rig were then evacuated by helicopter.

“The helicopters cannot land on the rig, because there are large waves and there is too much movement, so they (staff) are being hoisted up one at a time, ” said Sunde.

The remaining staff have stayed on board the rig, which is now under its own power and on its way towards the coast, according to a Ritzau report brought by Danish broadcaster DR.

NRK reports that the rig is expected to arrive near either Mongstad or Ågotnes on Thursday evening.

Statoil has set up an emergency centre for the affected employees at the Scandic Bergen Airport hotel.

“Medical personnel are present, and there is also a priest available if anybody needs someone to talk to, ” said Eek.

The rig was in the process of a drilling job, but was, due to the bad weather, disconnected from the well when the accident occurred, the press spokesperson added.

Meanwhile, more than 200 people were evacuated from a second rig after a barge came loose from its tug and began drifting towards the rig in the Valhall oil field, also in the North Sea.

“We have evacuated people from the Valhall field to nearby platforms… due to the barge, which is currently being driven [by weather conditions] to the south of the Valhall field, ” said BP Norway spokesperson Per Ivar Hansen to Norwegian newspaper Dagbladet.

The high waves and strong winds made it impossible for the tug to hold on to the 110 meter-long barge, and weather conditions on Thursday made it difficult to predict the direction of the loose barge, according to Hansen.

The evacuees were transported by rescue helicopters from Stavanger Sola Airport.

Shipping firm Eide Marine, which owns the barge, told Norwegian newspaper VG that it was monitoring the situation.

“We are trying to get a complete picture of the situation and what has happened. We will work with the coastguard see whether it is possible to change the barge’s course, and try to get control over it, ” Eide Marine’s administrative chief Kjartan Mehammer said to VG.

How to Ignite a Gas Flare on an Oil Rig