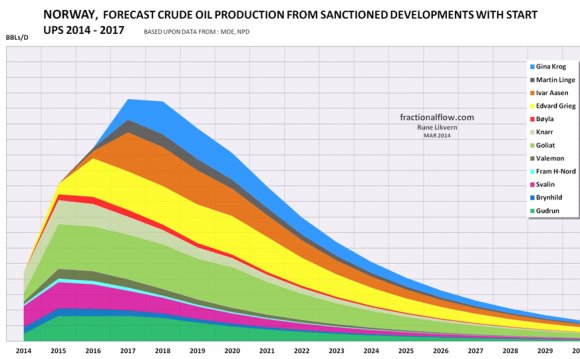 The financial position of the Norwegian government is astonishingly strong. While most other national governments in Europe and North America, especially in recent years, have been posting sizable annual budget deficits and accumulating additional debt, Norwegians have seen their government post sizable annual budget surpluses and add to a rapidly growing fiscal reserve - popularly known as the oil fund - that now has a market value (almost $850 billion) more than 1.5 times larger than Norway's GDP! "We are all millionaires now, " declared a Norwegian acquaintance, noting that the market value of the oil fund has risen beyond five trillion krone - for the five million Norwegians. A few days ago, the central bank of Norway announced that in 2013 the market value of the giant oil fund increased by more than 1.2 trillion Norwegian krone (about $200 billion), partly from returns on the fund's investments, partly from new capital transferred by the government to the oil fund, and partly due to a weaker krone exchange rate (the oil fund's investments are placed outside Norway in other currencies).

The oil and gas reserves under the Norwegian continental shelf are being transformed into financial reserves for future generations. Several other political communities in Europe or North America are substantial oil and gas producers from public land, but no other government in Europe or North America is saving its petroleum wealth for future generations to nearly the same extent.

The British continental shelf abuts that of Norway, and for many years Britain was a larger offshore producer than Norway. But Britain has no investment fund saving in another form the wealth represented by these non-renewable resources. The revenue from oil and gas development has been spent. The story is similar for oil and gas lifted from Federal land in the United States, notably in the Gulf of Mexico. The same is true for the Mexican government, which uses current petroleum revenue to pay for a large part of its annual budget.

The closest counterparts of Norway's oil fund in Europe or North America are the investment funds created with petroleum revenue in Alberta (current population roughly four million) and Alaska (current population almost 750, 000). Both of these funds were established in the mid-1970s with the great surge in oil prices. But they are now far smaller in market value than the Norwegian fund, and are used in different ways. At the end of 2013, the Alberta Heritage Fund had a market value of C$17.3 billion (about the same in US$). The Alaska Permanent Fund reached a market value of $50 billion late last month. As noted above, the value of the Norwegian oil fund is approaching $850 billion.