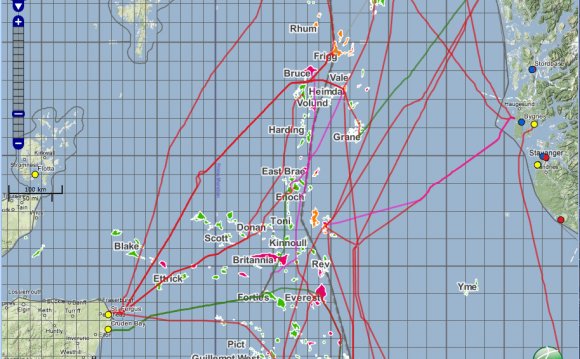 Bruce was discovered in 1974 and still provides an important source of gas for the UK. Production commenced in the 1990s from two platforms, with a further platform added later. The high-pressure, high-temperature Rhum gas field, which is tied back to Bruce, was brought into production in 2005. Production from Rhum was suspended in November 2010 to comply with EU sanctions against Iran. Following the UK Government’s 2013 announcement of a new temporary management scheme, we are now working to bring Rhum back online. Restarting Rhum will allow Bruce to continue producing beyond 2020.

With nine different reservoirs and a variety of field operatorships, the Eastern Trough Area Project ranks as one of the largest and most commercially complex North Sea oil and gas developments of the past 20 years. BP is planning a major life extension project as part of the overall field development strategy. The project is now in the appraisal phase, and is scheduled to start up in 2015. An accommodation ‘flotel’, to provide more bed space, will be deployed to allow long-term reliability, fabrication and new wellwork to be performed alongside near-term, production-adding work. BP sees significant potential and remaining field life in ETAP - a reason why, in 2012, the company increased its equity share in the asset.

The Forties Pipeline System is an integrated oil and gas transportation and processing system, which has played a major role in the development of the Central North Sea over nearly 40 years. Continued investment in technology and reliability, together with responsible asset management, has enabled FPS to remain the single most important piece of oil and gas infrastructure in the UK. The system brings a significant proportion of the UK’s oil production to the mainland. An enhanced gas separation project at the Kinneil terminal will provide further capability and flexibility to meet the needs of current and future customers.

The Miller field was operational for 15 years, during which time it produced some 345 million barrels of oil. The field started up in June 1992 and, during the plateau years to 1997, output averaged up to 150, 000 barrels of oil and 225 million cubic feet of gas per day. Production ceased in July 2007. BP is now progressing a programme, which received UK Government approval in December 2013, to decommission the Miller field and platform.

Clair, the first fixed platform in the west of Shetland area, started producing in 2005. With an estimated eight billion barrels of oil in place, it is the largest oilfield in Europe. The field was discovered in 1977, but it was only with significant advances in technology and innovative engineering that the first phase of development was made possible. Clair Ridge, the £4.5 billion second phase of development, will involve the construction and installation of two new, bridge-linked platforms. In the summer of 2013, we safely installed the two new platform jackets in the North Sea, a major milestone in the Clair Ridge project. Also in 2013, an appraisal drilling programme began to help define a possible third phase of development for the Clair field.

Foinaven was the first deepwater oilfield to be developed in the UK and continues to be among BP North Sea’s top-producing fields. The pioneering fast-track development was based on a network of subsea wells linked to an FPSO vessel, the ‘Petrojarl Foinaven’. A significant investment programme to renew and replace some of the subsea pipeline system was completed in 2012. BP is reviewing the potential for accessing additional hydrocarbons in the area, to extend the economic life of the hub and to ensure that Foinaven continues to produce safely and reliably for at least another decade.

Magnus is BP’s oldest platform in the UK North Sea and, despite its age, remains a key asset within the company’s portfolio. The field has achieved strong oil recovery through the long-term application of the water-alternating gas (WAG) enhanced oil recovery (EOR) scheme. As part of this scheme, Magnus imports a large proportion of BP’s produced west of Shetland gas - an innovative, strategically important connection. Magnus will be the first facility to benefit from BP’s North Sea Renewal Programme, designed to extend the life of our mature assets, while improving reliability and creating capacity for production-related activities. The investment will help enable Magnus to deliver its reservoir potential into the future.