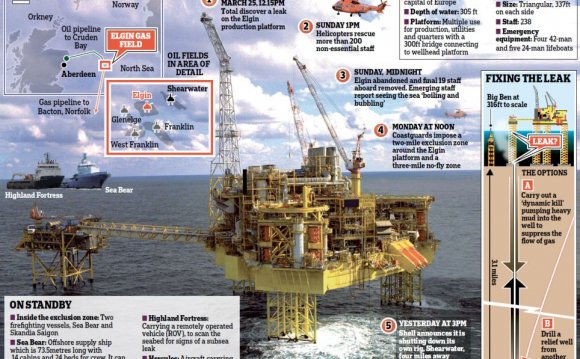 167 out of 228 workers either on the rig or one of the safety vessels patrolling it died during the Piper Alpha disaster. Photograph: I.T.N./Rex Features

The Piper Alpha disaster which killed 167 workers on 6 July 1988 off the coast of Aberdeen is the world'sdeadliest ever oil rig accident.

The controversy around it was heightened when a report into the disaster by Lord Cullen judged that the operator Occidental Petroleum had used inadequate maintenance and safety procedures. He made more than 100 recommendations about how safety should be improved in the North Sea.

Along with other oil companies, Occidental had massively scaled back spending as the price of oil had plunged from more than $30 per barrel to $8 in the 1980s compared to today's level of more than $100.

Piper Alpha was once Britain's biggest single oil and gas producing platform, bringing more than 300, 000 barrels of crude a day – 10% of the country's total – from below the seabed 125 miles north-east of Aberdeen.

It was owned by a consortium of foreign companies including Texaco and operated by Los Angeles-based Occidental, which sold off its UK interests soon after the disaster to concentrate on the US and Middle East.

Oil was discovered at the Piper field in 1973 and was brought on stream three years later. By 1980 the steel platform was modified to also take gas and was connected by pipeline to the Orkney Islands.

The original modules on the structure were carefully located, with the staff quarters kept well away from the most dangerous production parts of the platform. But this safety feature was diluted when the gas compression units were installed next to the central control room. Further dangers arose when Occidental decided to keep the platform producing oil and gas as it set about a series of construction, maintenance and upgrade works.

A lack of communication at a shift change meant staff were not aware that they should not use a key piece of pipework which had been sealed with a temporary cover and no safety valve. Gas leaked out and ignited while firewalls that would have resisted fire on an oil platform failed to cope with the ensuing gas explosion.

When the platform blew 167 out of 228 workers either on the rig or one of the safety standby vessels patrolling it died. The platform was completely destroyed and it took almost three weeks for the fire to be brought under control by famed American wild well controller, Red Adair.

The accident cost the Lloyd's insurance marketmore than £1bn, making it the largest insured man-made catastrophe. Occidental paid out $100m (£66m) to families of the deceased but escaped any kind of criminal or civil sanction. No one was made personally liable in the courts either.