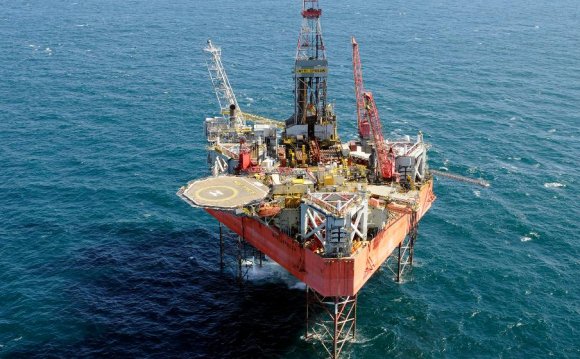 ABERDEEN, Scotland, July 7— About 165 oil workers were feared dead today after a towering oil platform off the east coast of Scotland exploded and burned in what officials said was the worst rig disaster in North Sea history.

Rescue workers said they had pulled 65 workers from the water after the Piper Alpha rig, which rose 150 feet above the sea, erupted into an inferno late Wednesday night and tore in two.

The survivors, some unscathed, some with burns over 50 percent of their bodies, were brought back to this port city in northeast Scotland. About 21 were hospitalized. Explosion in Gas Chamber

At a news conference here this evening, John Brading, an executive vice president with Occidental Petroleum, which owned the rig, said it appeared that the first of two explosions resulted from a leak in an underwater chamber where natural gas was compressed before entering a pipeline.

At the top of the platform, a continuous flame burns off excess gas. Rescue workers said they saw bubbles of natural gas rising that caught fire once they reached the surface.

Cecil Parkinson, Britain's Energy Secretary, said this afternoon in a speech at the House of Commons that 16 bodies had been recovered and that 150 other workers were still missing. Rescue workers said they had little hope that the 150 had survived.

''It was a case of fry and die or jump and try, '' Roy Carey, a 45-year-old survivor, his eyes swollen and scorched, told a group of reporters from his hospital bed. ''There was no time to ask -it was over the side or nothing. I just dived - it may have been 60 feet.''

Government and industry officials said that about half the 230 workers aboard the platform, 120 miles offshore, were sleeping when it exploded shortly after dusk.

''The living quarters were destroyed in the blast, '' Mr. Parkinson said. ''That's why it appears that there is a very substantial loss of life.''

Most of those who survived were working, and many of them slid down hoses or dove from the platform into the sea. Several survivors said they had to dodge huge flames in the water and often had to bob their heads underwater to cope with the extreme heat.

Indeed, 24 hours after the explosion huge clouds of smoke were still billowing from the blackened wreckage.

Mr. Brading, the Occidental Petroleum executive, said, ''Those who were lucky and able to escape were up and at work at the time and were able to jump straight into the sea and get into rescue vessels.'' Inquiry on Lifeboats Urged

Mr. Brading called for an urgent inquiry into the disaster as he questioned why none of the lifeboats, with a capacity for 300 workers, had been used.

At dawn, rescue efforts included 15 helicopters and 21 ships, including 6 vessels in a North Atlantic Treaty Organization task force that was performing maneuvers about 100 miles from the platform. The rescue team, which incuded members of the Royal Air Force, searched a 240 square-mile area around the 12-year-old rig.

''When we went on late last night, we certainly could see the fire raging from 60 to 70 miles away and the flames at that time were, we'd estimate, 300 or 400 feet, '' Garfield Porter, a squadron leader with the Royal Air Force, told British television. ''It was really an inferno. It was a very confused picture, but certainly people were being picked out of the water, especially in the first hours.''

Speaking in the House of Commons this afternoon, Prime Minister Margaret Thatcher said, ''We all wish to express our deep sympathy with the people concerned, those who have been injured and the bereaved of the very, very many we seem to have lost.'' Elizabeth Expresses Sympathies

In addition, Mr. Parkinson, the Energy Secretary, said he had been asked by Queen Elizabeth to express her ''heart-felt sympathies.''

Rescue team officials said one rescue boat that had rushed to the platform caught fire when the platform exploded a second time. Two of the three rescue workers on that boat are missing.

Mr. Parkinson said the explosion appeared to have been so violent ''that the platform was effectively destroyed.''

The worst previous North Sea oil disaster occurred when the accommodations platform Alexander L. Kielland, which housed workers at the Ekofisk field in the Norwegian sector of the sea, capsized in a storm on March 27, 1980, killing 123 men. Death Toll Since 1968 Above 400

The Piper Alpha explosion has pushed the death toll from North Sea oil and gas accidents to above 400 since 1968. In 1984, an explosion on the Piper Alpha rig injured several workers, and the cause remains undetermined.

The Piper Alpha explosion Wednesday night was the third North Sea explosion this week. Last Sunday, the British Petroleum Sullom Voe terminal in the Shetland Islands blew up, causing heavy damage but no casualties. On Tuesday, the Brent Alpha platform exploded, with no casualties.

The explosion on Piper Alpha came four years after a smaller explosion in a gas processing module on the platform slightly injured four people. Limited oil production resumed within a few days of that accident but it took more than three months to resume full operations.

Britain began drilling in the North Sea in the late 1960's, and its huge discoveries there provided a major economic lift in the 1970's and throughout this decade.

John Garrett, the Labor Party's shadow minister on energy, said he was ''appalled'' by the disaster and called for an ''immediate inquiry.'' In addition, Roger Lyons, assistant general secretary of the Manufacturing, Science and Finance Union, whose members were working on the platform, told reporters that ''in the interests of the 10, 000 oil workers in the North Sea and their families, '' the Government should name an independent health and safety inspection team for the oil rigs. Second Blast Collapses Deck

Several survivors said they ran out onto the deck as soon as they heard the first explosion. They said they were standing there when the second explosion came, causing the deck to collapse, and in a sense providing them with some protection as they fell into the sea.

He said there were flames at all four doors leaving the sleeping quarters. ''I thought I was dead, '' he said. ''I thought I had had it. All of a sudden the floor opened up - the deck just collapsed.'' Next thing he knew he had fallen some 60 feet into the water.

The Piper Alpha platform, which had recreation rooms and a helicopter pad, had six huge steel legs tied to the sea floor. Most of its 649 feet in height was hidden by some 500 feet of water. Oil Carried by Pipeline