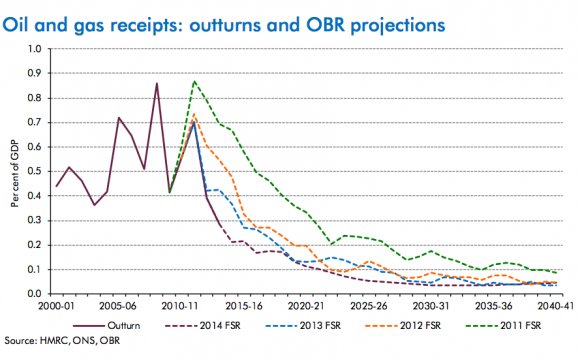 Ships tied up at Aberdeen, Scotland, where much of the UK oil industry is based. Photograph: Murdo MacLeod

The Office for Budget Responsibility has warned that North Sea oil and gas could generate just £100m a year in tax in future after it dramatically slashed its forecasts for North Sea tax receipts.

In a significant blow to the Scottish National party’s quest for full fiscal autonomy, the OBR said it now believed the sector could only generate a total of about £2bn in tax revenues over the 20 years from 2020 to 2041, compared with its forecast last year of £37bn for the same period.

The OBR stressed that since the sector was highly volatile and unpredictable, its figures were subject to “large forecast errors” and uncertainty.

But it said the latest revisions were based on recent tax cuts for the sector by the chancellor, George Osborne, introduced after the collapse in global oil prices and a linked fall in North Sea productivity, coupled with the steep surge in tax discounts to help the industry pay to decommission its ageing oil platforms.

Those developments, which will increase debate about the sustainability of Scotland’s higher public spending per head than the UK average, meant the OBR has also cut its predictions for tax receipts in 2019-20 to £700m, down from the £3.5bn it forecast last year for 2018-19.

The party tabled amendments to the Scotland bill to allow Holyrood full control in future over all Scottish taxation, excise duties, borrowing and government spending, save only spending on UK level areas such as foreign affairs and overseas aid.

Hours earlier, Nicola Sturgeon, Scotland’s first minister, had again stressed she wanted maximum fiscal independence for Scotland as she met Christine Lagarde, the head of the International Monetary Fund, on her official visit to New York where the pair discussed the current position of the Scottish economy.

Ian Murray, Labour’s shadow Scottish secretary, said the OBR’s new figures “highlight the madness of full fiscal autonomy for Scotland. The SNP is looking to deliver something that they know is economically illiterate and raises questions about their economic credibility.”