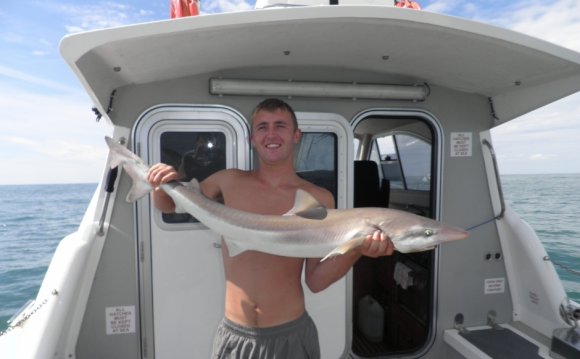 Casting here and there

I have been fishing along North Devon’s coast for almost 30 years and for much of that time I have been involved in the Combe Martin Sea Angling Club. As Secretary of the club I have worked on the clubs newsletter which is generally well received with its blend of news views and angling tales.

At a recent club meeting I raised the idea of producing a guide booklet on fishing along the North Devon coast. My idea was to produce an informative and entertaining guide that would promote angling in North Devon. I will concentrate on the section of coast between Foreland Point and Barnstaple as this is the area I have fished most over the years.

The North Devon coast offers some of the best sea fishing in the country and yet it is only lightly fished when compared to other regions. The low density of population is probably the main reason for this though I am amazed at how few visiting anglers cast a line.

There is a wide range of species to target throughout the year over a richly varied and beautiful coastline. Rock marks, Sandy storm beaches, steep shingle beaches, Estuaries and harbours all provide good sport at the right time.

The angler can expect to see an abundance of wildlife all along the coast. Peregrine Falcons, Ravens and Sea birds glide above steep cliffs. Otters, Herons, Kingfishers and a multitude of wildlife hunt the estuary. The sea itself provides regular sighting’s of Dolphins, Porpoises, Basking Sharks and Seals.

The top species for each month

Many anglers favorite time to get out onto the rocks. Big cod and conger are often caught throughout this month as they move inshore to feast on whiting and pouting. After winter gales all species move close inshore to feast upon dislodged crustaceans and marine worms, etc.

The first half of the month should continue much as January though by the second half of the month fishing will begin its slide towards the spring doldrums. Dogfish, rockling and the occasional big bull huss provide the bulk of sport.

Is the quietest month of the year. Rockling and dogfish from rock marks with occasional plaice caught over sandy ground. Spotted ray can be caught from some rock marks casting onto sand. The first mullet will move inshore but are almost impossible to tempt in the cold waters.

Dogfish often become very prolific all along the coast during this month. The first small eyed ray can be caught now along with the occasional bass. Grey Mullet will move into the estuaries, both thin lipped and thick lipped varieties. Ballan wrasse start to show from rock marks.

The first of the true summer species move in with mackerel and garfish moving within range of rock fisherman. Bass fishing will start to improve along with ray from the storm beaches. Smoothound provide exciting action at certain marks.

A continuation of the May action with bass falling to lures and fly fishermen in the estuary. Mullet fishing starting to become worthwhile as water temperatures rise. Porbeagle shark will be possible from boats as they chase mackerel and pollock over the rocky reefs offshore.

Summer sport reaches its peak. All summer species prolific with the chance of exotics like triggerfish. Wrasse fishing at its best, bass and smoothound move into feed on the spider crabs as they begin the big summer peel.

The mullet fishing for thin-lips is at its peak at this time and each year large numbers fall to baited spinners in the Taw Estuary.

Ray fishing can be good from Scillery, Putsborough and Woolacombe at this time of year. However trips need to coincide with darkness which will mean a sleepless night at this time of the year.

The last true month of the summer season. Bass fishing should be at its peak along with mackerel and the all the fish previously mentioned in July.

Big predators can be caught this month with porbeagle shark prowling the rocky reefs offshore. The tope will move close inshore and can be caught from selected marks in the Lynmouth area.

Often the best month of the year the grey mullet enthusiast with float fished or paternoster bread tempting many of these hard fighting fish. The species are abundant all along the coast in harbours, estuarys and rocky coves.

Flounder fishing will be getting started in the estuary and easy fishing can be had all along the Taw Estuary with proven marks like Ashford Strand, Pottington, Castle Quay, and Fremington Quay all worth a try.

As the days shorten evening sessions become more viable for conger, bass and tope. Flounder caught from the estuary can be used to good effect as tope baits.

Grey Mullet will continue to provide good sport and can be caught right through till December weather permitting. Surprisingly other summer species can be caught with garfish showing into November some seasons.

Codling will be moving into the estuary mouth at Crow Point and can provide good sport along with the occasional bass.

Flounder will start to pile on weight in the estuary and most years will see an abundance of 2lb plus fish come to the scales at numerous competitions held in the estuary at this time of year.

The first of the winter Cod may be caught from rock marks in the Watermouth to Ilfracombe region. Big conger and tope are also a possibility.

Whole squid or sandeel baits cast out onto sand from Watermouth or Capstone stand a good chance of finding a big blonde ray, especially after an autumn storm. There are often large numbers of whiting from Watermouth and Ilfracombe.

Is it really that time again winter cod, conger and whiting from the open sea along with flounders in the estuary at their heaviest as they prepare to leave on their way to spawning.

Seasons vary and overlap. It is impossible to predict what each season will bring. So many factors affect the fish and fishing. My advice is to keep a diary of your results, keep your ear to the grapevine and get out fishing as often as you can. Try different marks from time to time but make sure you get to know some really well.

The long and torturous footpath descends from the A 39 at Countisbury Hill to this steep shelving beach. Pebbles give way to sand at low water. This mark can be well worth the walk and has produced many fine specimen fish over the years, including tope, ray, bass and bull huss. Dogfish can be problem at times as they snaffle the baits intended for more worthy quarry.

The venue tends to fish best over high water. Care needs to taken to avoid getting cut off in the bays that back on to the steep and crumbly cliffs. Do not attempt to fish here in rough conditions. Be aware that what looks a gentle wave from the cliff top is often far more intimidating when on the beach itself.