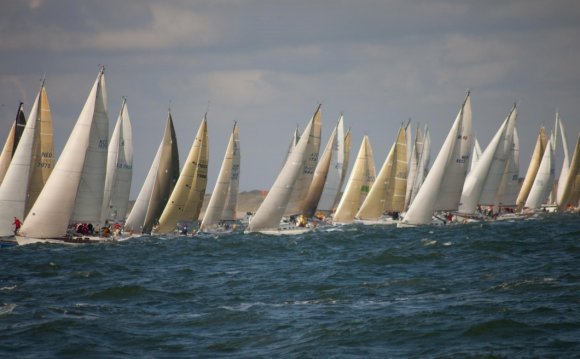 Scheveningen, Monday May 25th, 2015 – The 70th edition of the North Sea Regatta, powered by Delta Lloyd, had been successful. This vintage edition the cat’s came to the NSR terrain, the ‘Knappe Mannenband (translated: The handsome men band) has been brought together for once to perform an real North Sea Regatta Blues and there has been invested in a fun after sail at the NSR terrain.

The first Dutch Champion TwoHanded is John van der Starre with the Xcentric Ripper. We have some new Dutch Champions in the ORC1, ORC2 and ORC3 and F18 sailors Zeekant and Begemann have won the North Sea Regatta for the first time in their sailing careers. The organisation of the North Sea Regatta is looking forward to 2016 where they hope pull together an extraordinary event with Delta Lloyd, the council The Hague and their newest sponsor Moving Intelligence, also winner of the Frans Sluyters goblet.

Van der Starre couldn’t be happier with the title of Dutch Champion
The very first Dutch Champion TwoHanded ever is John van der Starre together with Robin Verhoef. With their Xcentric Ripper they sailed really fast and set down a great performance. “I’m walking on the clouds”, said van der Starre. It is his third title in the sailing sport. “You always have bumps on your way, with the Vuurschepen and North Sea race we really had some troubles. In England I even promised to stop with sailing.”

De races overseas are completely different from the races onshore. “From England back to the Netherlands we almost didn’t sleep in 25 hours. And last weekend we had some though competition with the other Dutch TwoHanded.” Yvonne Beusker, from the TwoHanded class organisation, said the same thing one day earlier. The level of the Dutch TwoHanded competition is really high. For the Dutch Champions the Fastnet is the next big race. “The North Sea Regatta stood very high on our list, next big thing is the Fastnet. And in the mean time we will race some smaller matches in the Netherlands.”

Performance Yacht Group Dutch Champion ORC1
The Performance Yacht Group wins the Dutch Championship in ORC1 with Roy Heiner at the helm. Jascha Bach is satisfied with the result: “At the beginning of the event we had to get used to each other, but now we are happy with the outcome of this regatta.” His team was almost the entire weekend in the lead, on the last day they had an early start and had to start over. This way they suddenly sailed in the middle of the fleet. “Nice to sail with the rest of the fleet for once.” Bach sees the finish before Coincoin as one of his highlights this weekend. “Today we were in the lead of Coincoin, that really was a great feeling.” Coincoin is a faster boat than the Performance Yacht Group, so the joy of Bach is understandable. “Now we have the title of Dutch Champions, we want to go to the World Championships in Barcelona.”

Dutch Champion ORC2 Jai Alai
Alan Bornet is Dutch Champion ORC2. He is a bit surprised. “We had a lot of setbacks in our preparation”, he explains. “Everything that could go wrong, went wrong. The mast didn’t fit, the motor broke down and we even thought about withdrawing. But I’m glad we didn’t. The Jai Alai is a brand new team, some of the sailors had never gone offshore. So my compliments to everyone who has helped towards this victory.”

Patrick Horst, sailor of the NED7777 Moving Intelligence and SEO of Technocon is honoured: “It’s so nice to see, everywhere you see our flags, you just can’t miss us. We had a great event, sailed very well and to top that with this goblet really made our weekend.”

Numero Uno Dutch Champion ORC3/ORC4
The sailors of the Numero Uno were a bit tense this morning, they were in the lead, but just not enough to relax today. Yesterday they had a little setback, but today was a great day of sailing for this team. “We had two sublime starts en sailed two magnificent races. Only a few times a year you sail so good, everything was right and we were a really good team today”, says Van Vuuren. “Now off to the price giving ceremony. A great thanks to the organisation and volunteers, it’s great to see what they do all day. We really appreciate this!”

Big applause for the catamaran sailors
Not many surprises in the catamaran classes, the winners in the Dart18, F16, F18 and Nacra where leading all weekend. With 30 boats in the F18 Oscar Zeekant and Karel Begemann win this NSR with a lead of 10 points. Both sailors are really experienced, but they had never have won the North Sea Regatta.

Dick Ganseman and Rosemarie de Haan win this event in the Dart18, Sanne Wielenga and Thomas de Jong in the F16 and in the Nacra20 Xander Pols and Stefan Dubbeldam are the winners. There was an applause like never before for these sailors. It was for the first time the cat sailors started at the slipway near the Hellingweg. This way the sailors could be more involved at the event. The organisation and the sailors are really happy with this choice and hope to continue this.

Organisation happy about this vintage regatta edition
This 70th vintage edition had perfect sailing conditions, good organised races, sportive sailors, great party’s and a lot of volunteers who couldn’t be missed. The organisation of the North Sea Regatta, powered by Delta Lloyd, is satisfied with the results and hopes the 2016 edition will be an even greater one.