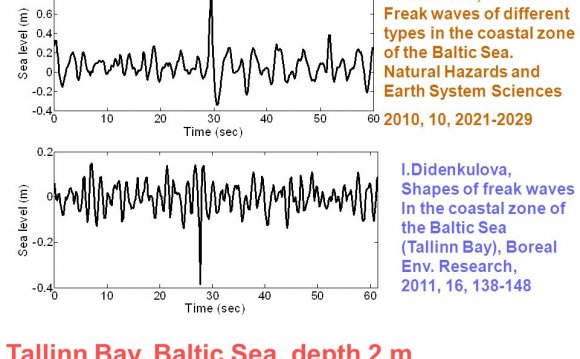 Countries that border the Baltic Sea to the north are Norway, Sweden and Finland. Russia, Estonia, Latvia and Lithuania border the east. The south is bordered by Poland, Germany, and Denmark.

The Baltic Sea is essentially a very large fjord covering an area of 415, 266 km2, with topography varying orderly from shallow areas (about 17% is less than ten metres deep) to deep basins with depths up to 459 m (Landsort Deep). The average depth is 53 m and the average volume 21, 547 km³. It is approximately 1500 km long and has an average width of about 230 km.

The annual fresh water river runoff into the Baltic Sea is about two percent of the total water volume of the Sea (greatest in May and least in January and February), draining an area nearly four times the size of the sea (1.7 million km2). A shallow and narrow connection with the North Sea means that water remains in the Baltic Sea for about 30 years. These two factors combine to make the Baltic Sea one of the largest brackish water bodies in the world, with a salinity that ranges from 1-2 parts per thousand in the far north and east to about 20 parts per thousand in the Kattegat near the North Sea. In contrast, fresh water has a salinity of of less than 0.5 parts per thousand, and an typical oceanic sea water more than 30 parts per thousand. A saline stratification layer (known as a halocline) exists at a depth of around 70 m.

The different regions of the Baltic Sea are summarized in Table 1 and illustrated in Figure 2.

The circulation in the Baltic Sea is driven by three chief forces:

On average, sea level rises about 25 cm from the Danish Straits towards the Gulf of Bothnia due to the river runoff.

If not interrupted by wind–driven currents, a continuous inflow of saline water from the Skagerrak forms the deep water of the Baltic. It is estimated that 740 km3 of saline water enters the Baltic per year. The inflow enters through the Great Belt (65%), the Sound (25%) and the Little Belt (10%). After passing through these, the saline water passes over the shallow Darss Sill (18 m), crosses the Arkona basin, flows through Bornholm Strait into the Bornholm Basin, and finally flows through Stolpe Channel into the Gotland Basin.

Important cities along the Baltic include:

In 1974, the then seven Baltic coastal states, signed a treaty to address pollution on a comprehensive basis. This convention entered into force on 3 May 1980. Following the end of the Soviet Union and the establish of several new states bordering the Baltic Sea, a new treaty was signed in 1992 among 10 parties: Denmark, Estonia, European Community, Finland, Germany, Latvia, Lithuania, Poland, Russia and Sweden. The new convention entered into force on 17 January 2000. The governing body of the Convention is the Helsinki Commission - Baltic Marine Environment Protection Commission - also known as HELCOM.

The goal of the Convention is for "The Contracting Parties shall individually or jointly take all appropriate legislative, administrative or other relevant measures to prevent and eliminate pollution in order to promote the ecological restoration of the Baltic Sea Area and the preservation of its ecological balance." In addition to contracting parties agreed to: apply the precautionary principle, promote the use of Best Environmental Practice and Best Available Technology, apply the polluter-pays principle, ensure that measurements and calculations of emissions from point sources to water and air and of inputs from diffuse sources to water and air are carried out in a scientifically appropriate manner, and ensure that the implementation of the Convention does not cause transboundary pollution in areas outside the Baltic Sea Area.

The Baltic Sea suffers from many consequences as a result of eutrophication, an excess of nutrients such as nitrogen, and phosphorus, which cause increased growth of algae and plants.

A large number of human activities and natural flows are the ultimate sources of the nutrients. The helsink Commission notes the following: