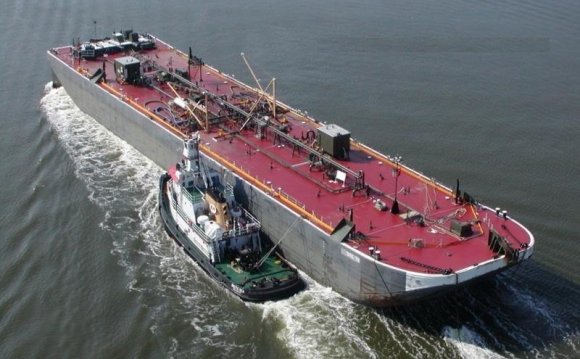 While pipelines and rail are often the transportation modes that spring to mind for moving oil in the US, there’s also a market for inland barges. In this week’s column, Petrodollars, Joshua Mann assesses how the market to move oil has shifted under pressure from crude prices.

The inland US crude-by-barge market was a promising one at the start of 2014. Kirby, the leading operator in the field, announced it would add 29 barges to its inland fleet by the end of 2014, and Kirby CEO David Grzebinski said as late as July of that year that the waterborne transportation markets had “strong fundamentals, ” and a “good long-term outlook, ” with inland contract pricing on the rise.

But the rapid crude price decline has caused long-term inland crude-by-barge contract prices to stall and renewals to wane.

A second price dive earlier this year pummeled market confidence in an early-2016 crude recovery and sent the contracts into a slide.

On top of all that, barged crude volumes have faced deep cuts since their 2013 peak after a slew of pipeline projects eased midstream congestion.

The rise of inland barge shipping mirrored that of crude by rail, as the same factors influenced both. Soaring North American production at the turn of the decade overwhelmed the existing pipeline infrastructure, especially in the Midwest, leaving crude trapped and piling up in producing regions.

North Dakota, home of the Bakken shale, produced on its own an average 769, 000 b/d in December 2012. Pipeline volumes out of the Midwest reached only 623, 000 b/d that month, according to Platts unit Bentek Energy, and it would have had to contend with the 1.79 million b/d of imported Canadian crude that month. Some of that would have been handled by Midwestern refineries, but some found its way onto barges headed south or rail cars headed east.

Likewise, the decrease in Midwest rail and barge volumes are analogous to each other. Pipeline operators have scrambled to build, reverse, or expand pipelines in the last six years.

These pipeline projects cut through the backed up crude in production basins and competed for takeaway volumes — the same volumes that barge and rail shippers had been moving while the pipelines were playing catch up.

Most of the barge barrels moving through the Midwest to the US Gulf Coast were of Canadian origin, transloading from pipelines or trains at terminals along the Mississippi River or its tributaries, said Sandy Fielden, RBN Energy’s director of energy analytics. The impact of pipelines on the economics of such barrels is evident in the discount for West Canadian Select through 2014.

WCS reached a deep discount to the WTI benchmark in November 2013, dropping to WTI Cushing minus $41.34/b. At that level, shippers were well-incentivized to load their crude onto the river and send it to refineries. But as that spread narrowed, and pipeline capacity continued to grow, the desperate pressure to get that crude to the Gulf Coast waned. Why bother with trains and transloads when there’s space on less expensive pipelines?

The US Energy Information Administration put May tanker and barge volumes from the Midwest to the Gulf Coast at 842, 000 barrels, a far cry from 4.905 million barrels in October 2013. Grzebinski estimated earlier in August that 200 inland US barges had switched to other services, leaving about 350 still carrying crude.

The decrease in contract prices is an interesting feature of the market when considered against the backdrop of rising spot barge prices. Kirby Chairman Joe Pyne pointed out that the spot price for barges has surpassed the contract price and is still rising, even as the contracts are moving down.

Here again, the barge market mirrors rail. Dakota Plains, which owns the Pioneer Terminal in New Town, North Dakota, doubled its crude-by-rail volumes in the first quarter, but many of its customers opted to buy spot-market space rather than commit to a contract, CEO Craig McKenzie said during the company’s Q1 earnings call back in May.

“Oil prices and spreads have somewhat rebounded, but will they hold?” McKenzie said at the time. “No one has been willing to sign up for renewals yet.”