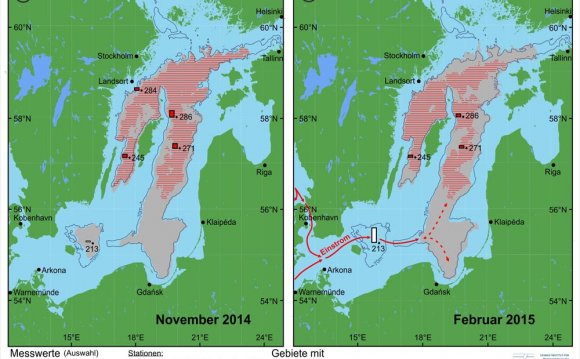 The inflow amounted to 198 km³ of highly saline water, with 4 Gt of salt.

The 2014 MBI is expected to finish a 10 year stagnation period in the central Baltic Sea.

The MBI statistics of the last 30 years may be biased.

The ecological state of the Baltic Sea depends crucially on sufficiently frequent, strong deep water renewal on the periodic deep water renewal events by inflow of oxygen rich saline water from the North Sea. Due to the strong density stratification these inflows are the only source for deep water ventilation. Since the early eighties of the last century the frequency of inflow events has dropped drastically from 5 to 7 major inflows per decade to only one inflow per decade. Wide spread anoxic conditions became the usual state in the central Baltic. The rare major Baltic inflow (MBI) events in 1993 and 2003 could interrupt the anoxic bottom conditions only temporarily. After more than 10 years without a major Baltic inflow events, in December 2014 a strong MBI brought large amounts of saline and well oxygenated water into the Baltic Sea. Based on observations and numerical modeling, the inflow was classified as one of the rare very strong events. The inflow volume and the amount of salt transported into the Baltic were estimated to be with 198 km3 and 4 Gt, respectively. The strength of the MBI exceeded considerably the previous 2003 event. In the list of the MBIs since 1880, the 2014 inflow is the third strongest event together with the MBI in 1913. This inflow event will most probably turn the entire Baltic deep water from anoxic to oxic conditions, with substantial spread consequences for marine life and biogeochemical cycles.

The Baltic Sea is a semi-enclosed sea in the humid zone of the northern hemisphere. Two narrow and shallow straits, the Belt Sea and the Sound, connect the Baltic Sea to the North Sea, and thus to the world ocean. The restricted water exchange through the straits is of high importance for environmental conditions in the entire Baltic Sea ( and ). Due to the high fresh water runoff from the catchment area, outflow conditions are generally dominating. The salt balance of the Baltic is maintained by sporadic inflows of highly saline waters from the North Sea. Saline inflows can be of barotropic or baroclinic type. Barotropic inflows are forced by sea level differences between the Kattegat and the Arkona Basin, caused by wind and air pressure forcing (, and ). These inflows may occur at any time of the year, although its probability is higher in the winter season, when the wind forcing is at its seasonal maximum. Baroclinic inflows usually occur during long calm periods in summer, and are driven by the salinity gradient between the Baltic and the Kattegat (, , , , and ). The saline inflows maintain the brackish character of the Baltic waters, with mean surface salinity of about 7 and bottom salinities between 11 and 13 in the central basins. The residence time of saline water in the Baltic is about 30 years. The strong vertical stratification of the Baltic Sea blocks the direct ventilation of the deeper layers by deep convection during the winter and during storms. Only the layers above the permanent halocline at 60 to 70 m depth are in contact with the atmosphere and are directly supplied with oxygen. The deep water is renewed exclusively by lateral advection, namely by the eastward spreading of dense waters from saline inflow events. Thus, the oxygen content of the saline inflow waters is of crucial importance for the environmental conditions in the deep water. Oxygen content of inflowing water depends on the season when the inflows occur. In summer the oxygen concentration of inflowing water is reduced due to high temperatures and by oxygen demand of biogeochemical processes. In fact, summer inflows do not considerably contribute to the ventilation of deep water. Mainly inflows between October and March may supply oxygen to the deep Baltic basins. Further, an inflow needs a certain volume of saline water to reach the bottom layer of the central basins. Small inflows are soon diluted on their pathway toward the central Baltic. Thus, the density of the inflowing water is reduced and finally the water is sandwiched somewhere between the halocline and the denser bottom water.

Bathymetric map of the southwestern Baltic Sea with positions of the measurement sites. The pathways of inflowing highly saline water are indicated by dashed bold arrows. The black dashed lines depict the location of across channel sections of . The entire area is covered by the applied high resolution numerical model.