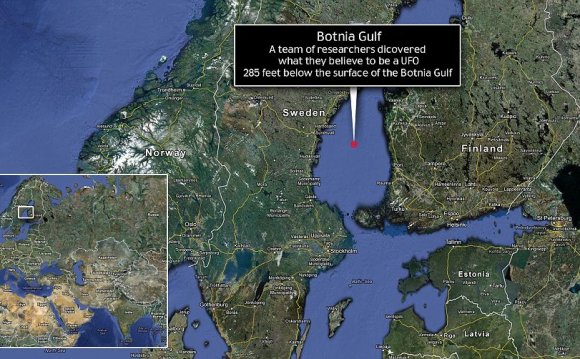 A feature on the floor of the Baltic Sea that was discovered last summer by Swedish treasure hunters is making headlines once again.

The latest media coverage draws upon an hour-long radio interview with Peter Lindberg, head of the Ocean X Team (which made the "discovery"), in which Lindberg delivers a string of cryptic and titillating statements about the "strange" and "mysterious" seafloor object his team has been exploring for a year.

Lindberg discusses various possibilities for what the object might be: "It has these very strange stair formations, and if it is constructed, it must be constructed tens of thousands of years ago before the Ice Age, " he said in the radio interview. (The peak of the most recent Ice Age occurred some 20, 000 years ago.)

Lindberg acknowledges that the object could instead be a natural formation, such as a meteorite that penetrated the ice during the Ice Age, or an underwater volcano; however, he gives the impression that scientists are baffled by it. Geologists, for example, have supposedly told him the object "cannot be a volcano."

Also adding titillation, Lindberg says a documentary is being made about the seafloor anomaly — the location of which he has not disclosed — and he's saving some juicy details for the footage. "We're not telling everything, " he said. "We will reveal some quite interesting things in the documentary."

The divers recently gave samples of stone from the object to Volker Brüchert, an associate professor of geology at Stockholm University. Swedish tabloids quote Brüchert as saying: "I was surprised when I researched the material I found a great black stone that could be a volcanic rock. My hypothesis is that this object, this structure was formed during the Ice Age many thousands of years ago."

In other words, an expert appears to back up their claims that this seafloor object is unexplained, and perhaps is an Atlantis-like ancient building complex. To double check, Life's Little Mysteries consulted that expert. Turns out, neither he, nor any of the other experts contacted about the Baltic Sea object, think there is anything mysterious about it.

"It's good to hear critical voices about this 'Baltic Sea mystery, '" Brüchert wrote in an email. "What has been generously ignored by the Ocean-X team is that most of the samples they have brought up from the sea bottom are granites and gneisses and sandstones."

These, he explains, are exactly what one would expect to see in a glacial basin, which is what the Baltic Sea is — a region carved out by glacial ice long ago.

Along with the mundane rocks, the divers also gave him a single loose piece of basaltic rock, a type of rock that forms from hardened lava. This is out of place on the seafloor, but not unusual. "Because the whole northern Baltic region is so heavily influenced by glacial thawing processes, both the feature and the rock samples are likely to have formed in connection with glacial and postglacial processes, " he wrote. "Possibly these rocks were transported there by glaciers."

Glaciers often have rocks embedded in them. At the end of the Ice Age, when glaciers across Northern Europe melted, the rocks inside them dropped to the Earth's surface, leaving rocky deposits all over the place. These are sometimes called glacial erratics or balancing rocks. [Gallery of the Weirdest Balancing Rocks]

Lindberg and the Ocean X Team did not respond to a request for comment on the glacial deposit theory.