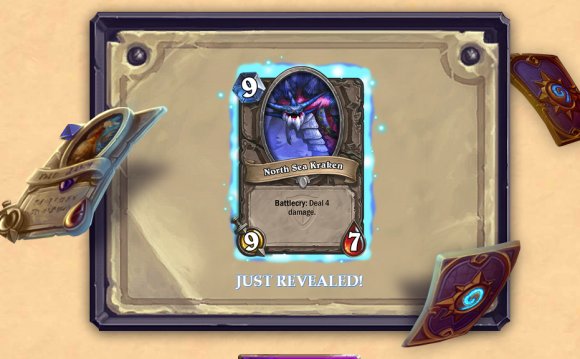 Appears to be immune to frost, and just ignores you, even if you attack it. I used Death Grip, which got it's attention for the 3 seconds of the buff, but once it wore, it turned and ignored me again.

This monster was added with patch 3.2. It's currently located Hrothgar's Landing north of Icecrown. and the sea monster is attacking some boats. It's immune to frost dmg. I wonder what this mob drops.

Saw him after getting some tallstrider legs, was freaked out, but he seems to ignore my attacks.

You can kill him with enough people. But he doesnt drop anything or give any kind of achievement. We just burned him down with 11 dpser's being as he doesnt require a tank. Also, his frost move is interruptable.

The quest in which you have to spear the kraken 8 times can be a bane at time. If you don't time it with taking off with hippogriff, you will always end up at one side of the area while kraken at other side and almost always out of range. Unfortunately you can't control hippogriff manually.

So make the flaming spear a hot key, target kraken as soon as you can see it, and spam away. If you're lucky you can get all 8 in one flight no matter how badly the featherbrained hippo mount paths around.

This guy is in reference to the Kraken in Nickelodeon's short-lived but hilarious cartoon series "Catscratch." In "Tale of the Tail" Gordon (the cat with the Scottish accent) must defeat the mythical beast in order to get a tail.

In the Alliance quest "Get Kraken!" you can make the following macros;
/tar north sea kraken
/tar kvaldir deepcaller
and spam these as you fly past the mobs while shooting.
Usually only takes one or two fly-bys.

There is a little bit of a cheat (not really, as you can do this on any taxi mount) so you can get in line with the Kraken so you can get within range rather than waste a few attempts trying to get in range. I discovered this completely by accident.

Simply log off while you're on the Griffon for a few seconds. Your position will remain the same from when you logged off and you could get within range of him when you're relogging. Just make sure to open your bags right away and target him so you can hit him a few times.

You can cyclone him and root him btw.. But not hibernate since he is not a beast ! :o

I use the macros:

Assign both to a couple of action buttons and hit the appropriate one whenever you approach a boat or the kraken. If done properly, you can get the whole thing done in about half a trip. They are not spammable as if no target is selected your cursor will glow meaning it wants you to select a target, and if you hit the button again it simply cancels the glow without using the item.

As far as I'm concerned, the only monster badass enough to show up on the map. If you check out the map of Hrothgar's Landing, you'll see the kraken in the middle of the map, near the boats.

If you kill him using Flaming Spears in your inventory will appear Kraken Tooth wich start an easy daily quest with 13gold reward.

Good look and take this extra and easy quest :P

Why do people downvote good information?

In the case that you're out of synch with the kraken and don't want to waste time circling the area just trying to get in range to throw spears you can do this (original post modified slightly):

A good way to fix your syncing with the Kraken is to log off for a few seconds and log back on.

I discovered this completely by accident by clicking on the harpoon icon and then clicking on my logout macro that was a few millimeters away from the harpoon button. This isn't actually a cheat or exploit either as it's natural taxi mount mechanics. (Yes, you can log out on a flight path and get the same results.)

What relogging does is you basically stop your mount in midair and then you can line yourself up and synch with the Kraken's spawns but you have to estimate how long your login screen will take plus how long it will take for him to move to the next boat while you're relogging. I can't say there's an exact science for how long you should wait to log back in because different people have different computers and the loading screen will have different wait times for everybody.

You might notice that he is a Boss mob. This means easier weapon skill leveling for those annoying weapon types. Leveled my crossbow skill as a rogue to 400 on him by standing on the mast of a boat, and shot him whenever he popped up, or shot the mobs below until he did pop.

He doesn't drop anything, he's simply not lootable. The above comment is made up.

If you do this in a group for the extra gold reward, be sure to be the last to hop onto a hippogryph. If the Kraken dies late (as part of your group is flying out of spear-tossing range) it's possible for the people in front to be too far to get the tooth as a reward.

What does the setup need to look like? Two dps, or one dps and one tank? No healer needed?

What I have to do to start this quest for first time? kill kraken? wait for the correct daily show up... pls If someone know...

So I finally found about about Hrothgar's Landing the other day (not Crusader yet), and decided tonight I was going to go look around. I'm flying around just about the water, find the Sunreaver boat and then *it spawns behind me*.

Never getting in the water ever again. ;_;

I thought the Pirates of the Caribbean kraken looked more like a giant octopus?

kraken is giant squid that existed in the ancient greek mythology a beast created by poseidon god of water which was brother of zeus the father of the gods.

I have solo him.but it was waste of time.

Weird that even if this mob doesnt look like a Kraken and is the same model with "The Lurker Below" and others, if you check the "Same Model As" tab, you can actually see that Blizzard named this model Krakken(SkinBlaBla). So they DID think Kraken looked like this o.o

Just soloed him during the Get Kraken! quest. Not sure if it's a bug with the new numbers or maybe Survival hunter mastery, but each spear hit him for 100k or so. I killed him twice in one run without getting a tooth. He was diving when I killed him both times, so I went back for another shot. Killed him before he even tried to dive, didn't get a tooth then either.

Apparently they either removed the tooth or you need to be in a group to get it. Either way, BOO.

Didn't get the tooth when I killed him after getting 8 hits/6 kills in my first run (he was also diving and I was a long way away, so I'm not *positive* it was the quest completion).

Abandoned, reaccepted, flew again, got a good run on him, killed him, got the tooth, finished killing the Kvaldir, done and done.

So if you don't get the tooth, abandon/reaccept Get Kraken and make sure you kill him before you finish the quest, there's a good chance it's required to get the tooth.

Was doing my dailys and then i saw this thing...it scared the crap out of me.

It would appear that if you try to kill it "normally, " it just despawns. I can get it down to ~55% health before it just vanishes, without doing its usual diving animation.

Every time I get him around 200K (with no spears), then he dives away and another spawns some time after with full health. :|

To get the Kraken Tooth to start it's quest, you have to have space in your bag, and kill the Kraken on your first run. If you miss this for whatever reason, you can abandon and restart the quest.

Good luck doing this one with your sanity intact now, the kraken dies in 2 spears and yours has to do damage to actually give credit.now add in ten other people trying to do it and prepare to rage.

Apparently the damage on those spears wasn't squished because the krakens drop like a sack of wet turds now. Which is a good thing, because in all of Wrath I never once got that damn tooth because the spears did bugger all damage.

Until the stat squish gets addressed on this, here's a macro you can spam so at least you're first to hit the Kraken:

As of now, virtually impossible to kill the Kraken in one pass to get the tooth. :(

As of 6.1, the Kraken is once again killable, at least for my level 100 toon. He's got around 450k health and it takes about 10 spears to bring him down and get the tooth.
Source: www.wowhead.com