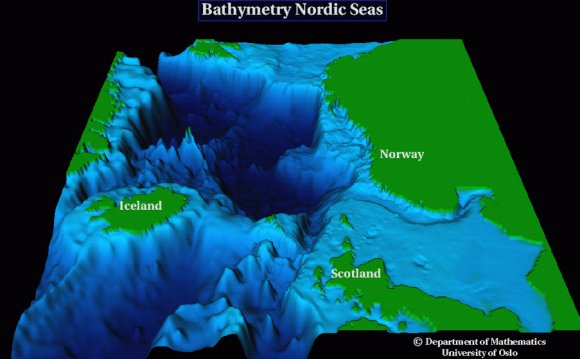 The mid-Pliocene warm period (MPWP; ~ 3.3 to 3.0 Ma) is the most recent interval in Earth's history in which global temperatures reached and remained at levels similar to those projected for the near future. The distribution of global warmth, however, was different than today in that the high latitudes warmed more than the tropics. Multiple temperature proxies indicate significant sea surface warming in the North Atlantic and Arctic Oceans during the MPWP, but predictions from a fully coupled ocean–atmosphere model (HadCM3) have so far been unable to fully predict the large scale of sea surface warming in the high latitudes. If climate proxies accurately represent Pliocene conditions, and if no weakness exists in the physics of the model, then model boundary conditions may be in error. Here we alter a single boundary condition (bathymetry) to examine if Pliocene high latitude warming was aided by an increase in poleward heat transport due to changes in the subsidence of North Atlantic Ocean ridges. We find an increase in both Arctic sea surface temperature and deepwater production in model experiments that incorporate a deepened Greenland–Scotland Ridge. These results offer both a mechanism for the warming in the North Atlantic and Arctic Oceans indicated by numerous proxies and an explanation for the apparent disparity between proxy data and model simulations of Pliocene northern North Atlantic and Arctic Ocean conditions. Determining the causes of Pliocene warmth remains critical to fully understanding comparisons of the Pliocene warm period to possible future climate change scenarios.

► We alter GCM bathymetry to see if warming is aided by ocean ridge subsidence. ► We find an increase in both Arctic sea surface temperature and deepwater production. ► The results offer a warming mechanism and an explanation for data-model disparity. ► Our results are compatible with paleoceoanographic and geophysical evidence. ► The Iceland–Faroe Ridge has a greater effect on climate than does Denmark Strait.