Oil fields in the North Sea 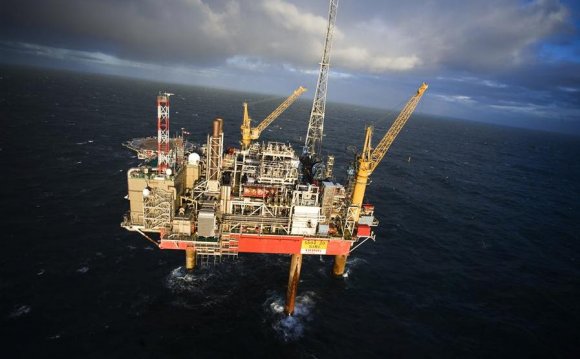 Statoil, a Norwegian company, and COSL - China Oilfield Services Limited - issued a statement saying they had learned "with great sadness" that one person had died and two were injured when a wave broke over a drilling rig Wednesday.

The rig, called the COSL Innovator, is under contract to Statoil at the Troll field in the North Sea, west of Bergen, a city on Norway's southwestern coast.

The injured people have been taken by helicopter to shore, the statement said.

The barge that broke loose had drifted passed BP's Valhall oil field - but remained unmanned and out of control early Thursday, a rescue operation coordinator said. Efforts to bring it under control were continuing, he said.

BP says it employs 235 people in the Valhall oil field in the southern Norwegian North Sea, 210 miles (340 kilometers) southwest of the Norwegian city of Stavanger. The oil field has eight platforms.

"Throughout the night, four helicopters evacuated people to other nearby platforms and onshore, " BP spokesman Toby Odone told CNN.

The Eide Marine Group, which owns the barge, tells CNN it is tracking the vessel. A spokesman for the group said early Thurday it was waiting for daylight before trying to take control of the barge.

The spokesman said the barge is 360 feet (110 meters) long and it became unattached in rough weather while being towed by a tugboat.

The barge is now drifting north, and ConocoPhillips, which operates an oil field to the north of Valhall, is watching warily - and has evacuated 145 people from the Eldfisk Center.