Sea Fishing in the North West 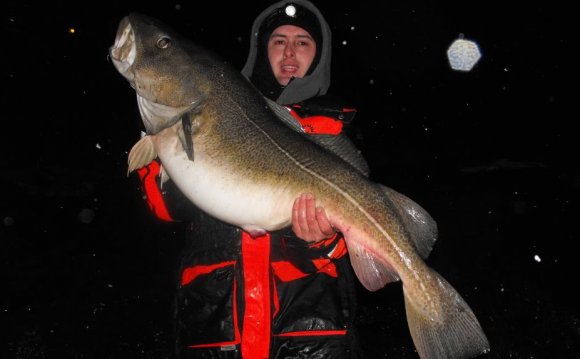 Lough Swilly has been synonymous with quality tope fishing, almost since organised sea angling in Ireland, began . In the seventies and eighties, however, there was a marked decline in catches and anglers were blamed, as it was then the practise to kill virtually every tope caught to satisfy the requirements for a “weigh-in” at tournaments. As a result literally hundreds of dead tope would end up on the pier at the end of these events. Thankfully things have changed since then and all tope taken are now returned alive to the sea, many of them carrying a bright yellow Fisheries Board tag.

Tope normally appear in late May or early June and remain in the Lough or its environs until September. The vast majority of tope in Lough Swilly are male “pack” fish which seldom grow to over 18kg. Male fish over this weight are rarities in the North Atlantic, so any tope heavier than this are almost certainly female. Fish to over 20kg are however taken occasionally, early in the season or around the time the pack fish start to disappear in late September.

Tope are one of our more “toothy” sports fish so baits are best presented on a running ledger of approximately 13 kg multi-strand wire or heavy (circa 55kg) monofilament attached at the business end to a sharp 8/0 hook. Fresh, medium sized mackerel baits are the favoured tope attractors, and they should be cut in flapper style (the whole fish with tail and backbone removed) or fillet (cut length-wise keeping half the head and tail). Tope can be taken from either a drifting or anchored boat in the Lough and the use of a “rubby dubby” bag of fish oil and entrails held together with bran in an onion bag, is usually an irresistible attraction for these predatory fish. To work properly the bag should be hung over the side of the boat, and fixed so that it just touches the surface of the water. The natural wave motion will then dip the bag in and out of the water creating an oily slick (biodegradable of course) which should arouse the tope’s interest and bring it to the bait.

Tope are not the only fish available to boat anglers in Lough Swilly. The ray fishing is outstanding at times with thornback ray over 5.0kg and homelyn (spotted) ray to 2.0kg regularly taken. There is also good fishing for plaice and dabs in Ballymastocker Bay where drifting ragworm baited spoons downtide of the boat brings best returns. Small boats can be launched safely from the slipway in Rathmullan and the adjacent car park can accommodate up to ten trailers.

Ray can also be caught by shore anglers fishing on slack tides, at night, from the pier at Rathmullan where ten fish in a session, to a single rod has been achieved. Occasionally a tope will also be hooked, but they are extremely difficult to bring ashore as it involves guiding them along the sides of the pier, keeping them away from the piles and metalwork, and negotiating them up onto the slipway on the northern side. Charter boats operate regularly from the pier mainly from May to September, or by special arrangement outside this period. Up to twenty species including cod, haddock, whiting, wrasse, dab and dogfish are regularly taken aboard boats fishing in water of depths from 25 to 40 metres. The entrance to Lough Swilly is bounded on the east by Dunaff Head and to the west by Fanad Head. All the gurnard family are present in the outer area with specimen greys to .80kg, reds to 1.40kg and tubs over 2.0kg turning up regularly to boat anglers. Lough Swilly is also well known as the starting point for vessels seeking offshore wrecks but it is one particular wreck which lies just 4km off Fanad Head for which the area is best known.

Between 2001 and 2003, underwater photographers Leigh Bishop and Antonello Paone, took numerous pictures which showed that the still recognisable bow section, had broken away from the largely collapsed main body of the wreck. The “Laurentic” lies in about 35 metres of water, and over the years, has provided easily accessible and consistently good fishing for ling, conger, pollack, coalfish, pouting and wrasse. Despite its tragic history, there are many charter skippers who would just love to have a “Laurentic” on their doorstep.

Mackerel can be caught, in season, on spinning gear, from Portsalon Pier (2) while bottom fishing will result in dabs, plaice, flounder, dogfish and occasional ray. The pier is tidal and there is virtually no water there at low tide, so fishing is generally best in the hours around high water. As at Rathmullan, night fishing is most productive.

The rocky outcrops around Fanad Head (3) provide popular vantage points for ornithologists. Here guillemots, razorbills, puffins, skuas and eider ducks can all be seen and rarer birds turn up regularly, on passage. The same rocks also provide several platforms for shore anglers, and depths of up to 13 metres are within easy casting range. Spinning over very foul ground from the finger of rock to the north of the lighthouse yields pollack, coalfish, and mackerel during summer. From the rocks to the south, spinning accounts for similar species with the addition of an occasional seatrout. Fishing close to the rock produces wrasse to 2.0kg and small coalfish, while distance casting over sand in Pincher Bay takes dabs, codling, dogfish and occasional ray.