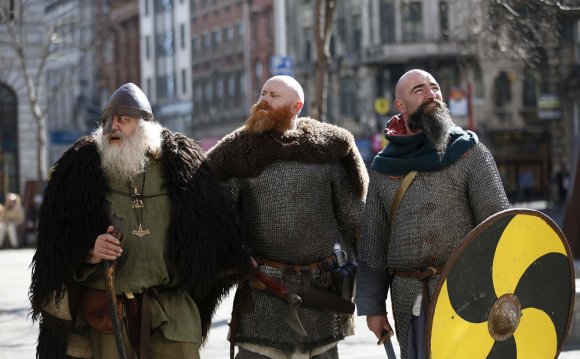 The History Channel in the US and History Television in Canada have announced they will be airing a scripted drama series, Vikings. The series will chronicle the extraordinary and ferocious world of the mighty Norsemen who raided, traded and explored during medieval times. Set to premiere in 2013, the series will be filmed in Ireland and throughout picturesque locations in Northern Europe. Shaw Media will be the broadcast partner in Canada, airing the show on HISTORY Television in Canada. The announcement was made by Nancy Dubuc,

“This is an amazing crossroads for HISTORY embarking on our first scripted series, ” said Nancy Dubuc, President and General Manager of History. “People think they know about the Vikings – we see references to them all the time in our popular culture from TV commercials to football teams – but the reality is so much more fascinating and complex, more vivid, visceral and powerful than popular legend. We will explore the mysteries of the Vikings – the adventures they took and the people who led them. And we will start to understand a past that is very much part of our collective DNA today.”

Vikings is an international Irish/Canadian co-production being co-produced by World 2000 and Take 5 Productions. Metro Goldwyn Mayer Studios will distribute internationally, outside of Ireland and Canada

Created and written by Michael Hirst – one of the premier historical story-tellers in the industry (Academy-Award winning film Elizabeth; and the Emmy and Golden Globe nominated series The Tudors), Michael serves as Executive Producer along with Morgan O’Sullivan of World 2000 (The Count of Monte Cristo; The Tudors), John Weber of Take 5 Productions (The Tudors; The Borgias), Sherry Marsh and Alan Gasmer.

“There is no better way to introduce the world to the new MGM Television Studios than with a powerful and epic drama like Vikings, ” said Roma Khanna, President Television Group and Digital, MGM Studios Inc. “We are thrilled to be able to bring HISTORY their first scripted series. Lead by Michael Hirst, this team of award-winning story-tellers will bring to life the mythical warriors, explorers and everyday people that will enrapture audiences.”

The Viking name is synonymous with brutality, terror and mystery, as it was from the very beginning when the first war bands appeared along the coasts of England and France at the end of the 8th century. The Viking reputation for brutality, exercised without pity or conscience, was an important part of the mythology that grew up around them.

Vikings follows the adventures of Ragnar Lothbrok, an actual historical figure, and the greatest hero of his age. The series tells the gripping sagas of Ragnar’s band of Viking brothers and his family, as he rises to become King of the Viking tribes. As well as being a fearless warrior, Ragnar embodies the Norse traditions of devotion to the gods – legend has it that he was a direct descendent of Odin, the god of war and warriors.

Unlike past movies and dramas that caricatured them as barbarians, Vikings will not look at Viking culture from the outside, but from within the heart of Viking society. It will be a series high on adventure, exploration, conflict, warfare and bloodshed – for these were extreme times – but, at its heart, it will also be a family saga.

Vikings will boast a polished, stylized look that pushes the boundaries of television drama. Imaginatively choreographed battles will emphasize individual points of view, strategies and ruses rather than mindless, graphic slaughter. Fast-paced battle sequences will be balanced against the astonishing beauty of the fjords and Viking longboats, works of art on a bloody canvas.

The series will be filmed at Ashford Studios, a newly built studio facility in Ireland. Ireland has been home not only to such acclaimed recent TV dramas as The Tudors and Camelot, but also to treasured feature films such as Braveheart, My Left Foot, Excalibur, Barry Lyndon and The Spy Who Came in From the Cold. All post production, visual effects, sound design and music composition will take place in Canada. The filming of Vikings will also take place throughout the landscapes of Northern Europe.