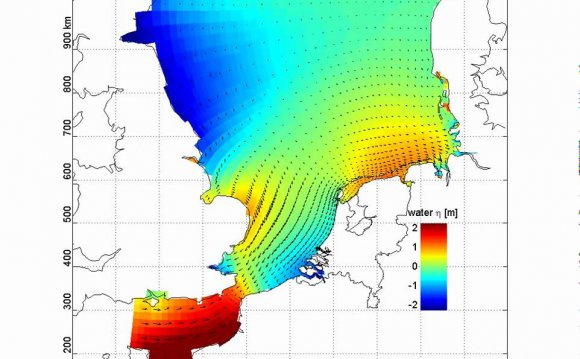 The North Sea is the shelf sea between Great Britain in the West and continental Europe in the East and South. It has strong tidal movements, and is prone to storm surges that occur when northwesterly winds whip the sea against the continental coast. The most severe surges tend to arise when storms combine with spring tides, during which the sun, moon and earth are all lined up to maximize the gravitational pull on the water. The coastal people have long fought and laboured to protect their lives and their land from the elements. Their history should be of interest to anyone worrying about the best way to adapt to “climate change” or “extreme weather”.

I first encountered the North Sea in 1971, when my parents took all of their six children to spend the summer with relatives on the small North Frisian island of Pellworm. This island is located in the Wadden Sea, off the west coast of Schleswig-Holstein, Germany’s northernmost province.

Map of the North Sea and adjoining countries (left), and blow-up of Pellworm and its surroundings.

The Wadden Sea is an area of coastal shelf so shallow that the sea floor becomes exposed during every tide of ebb. For several hours, the sea retreats by some 10 kilometers or more, and it then becomes possible to walk across the mudflats from one island to the next. Such walks might be a little scary and sometimes outright dangerous, for the next island may be hours away; the mudflats can turn from firm to swampy quite abruptly, and into some areas, one should not venture without a local guide. However, these walks were also fun; one could catch little fish, crabs and other creatures that were trapped in little pools and puddles left behind by the retreating water.

But what I found even more fascinating were the shards and bricks, the teeth and bones, upon which we occasionally stumbled several kilometers from the shore. I learned that these were the remnants of settlements whose inhabitants had perished in a great flood in 1634, and that an earlier flood had taken even more lives and land in 1362. Indeed, these two floods had been only the locally most devastating ones in a long series of storm tides. My father then told us that only nine years earlier, in 1962, a storm tide had killed more than 300 people in the city of Hamburg, where he then used to live and study, and that he had helped to collect the drenched bodies in the aftermath.

Above: Historical map of Pellworm and its surroundings. This map was drawn in 1652, that is, shortly after the great flood from 1634. The island named “Nortstrandt”, in the center of the image, is no more; the larger of its two remnants, on the left, now forms the island of Pellworm. The areas that surround the islands, shaded with criss-crossed lines, are the mudflats of the Wadden Sea; they presumably were solid ground prior to the great flood of 1362.

These stories of danger and disaster formed a stark contrast to the serene summer landscape, with sheep grazing and dozing right next to gentle waves. However, that the threat was real was plain from the aspect of the coastline fortifications. The entire island of Pellworm, and the continental shoreline as well, were protected by a dike seven meters high. Grass-covered, it had a fairly shallow profile towards the sea, although more steep close to the crown. On the island, this dike had just barely withstood the flood of 1962, and improvements were already underway; in some places, the dike had been elevated another one or two meters and also been given an even shallower and more regular profile, so as to minimize the impact of the onrushing storm waves. Indeed, these new dikes would prove their worth in the even higher flood of 1976; all failures in that flood occured in segments where this modernization had not yet been completed.

Modern sea dike on Pellworm (left, source), and historical illustration of a sea dike (source). The very shallow profile of the modern dike minimizes the impact of onrushing storm waves; it also belies the height of the structure, which approaches 10 m. In the photograph, it is ebb tide, and the sea has receded beyond the horizon.

The shoreline was also decorated with breakwaters built from wooden poles and brushwood, which served to slow the tidal movement, promote the deposition of sand and mud, and ultimately reclaim land from the Wadden sea. The process of land reclamation could be seen in its various stages. Saltwort settled on freshly risen banks and aided in their further growth and stabilization. Drainage trenches were dug, and the excavated mud used to further elevate the banks in between, which then became overgrown with grass; the trenches eventually became filled in by further mud deposition to form a continuous area of elevated marsh land. In many places, reclaimed marshes had been surrounded with new sea dikes and turned into farm land.

A little further behind the new sea dike, older dikes were still visible; and the older they were, the lower, steeper and less adequate they seemed. Yet, even these older dikes were still being maintained, and where roads cut through them, wooden barriers were on hand with which to close the gaps in emergencies. Moreover, these dikes were hundreds of years old, and considering that they had been erected by hand, they actually were quite impressive in their own right.

My Sandcastle Washed Away by North Sea Tide