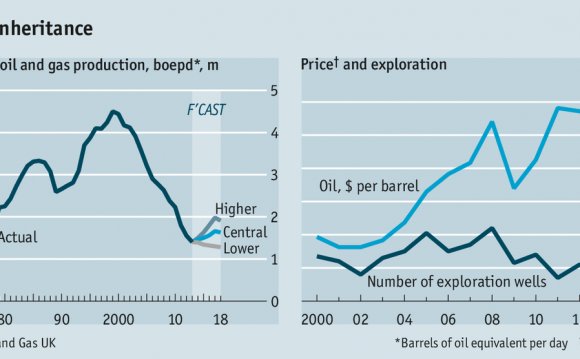 North Sea tax receipts have plunged into the red for the first time in the sector’s history after the steep decline in global oil prices.

HM Revenue and Customs figures show that offshore corporation tax receipts for April to September were only £203m, compared with a six-monthly peak of £3.3bn in 2011. Petroleum revenue taxes for those six months stood at -£242m, compared with periods where PRT raised £577m in a single month.

The latest figures for the most important North Sea tax revenues – corporation tax and petroleum revenue tax – show the sector effectively cost the taxpayer £39m over the first six months of this financial year.

Excluding other minor tax receipts, which will be calculated by the Treasury at the end of the financial year and may see a small overall surplus, the North Sea generated negative tax receipts from April to September after oil prices again crashed to as low as $43 (£28) a barrel.

The new data has shattered the most recent official forecasts from the Office for Budget Responsibility, which had predicted in July the sector would generate £700m for the Treasury this year, and undermined even more optimistic predictions by the Scottish government.

John McLaren, an economist and honorary professor at Adam Smith business school at Glasgow university, said: “It may be the first time there has been a negative tax take over a six-month period and means it will be very difficult to attain even that £700m figure, which itself is much revised down from a year ago.”

McLaren added that the latest data reinforced the fact that this was “nearing the end of the North Sea as a source of revenue” for the government. “Really, its future importance is in maintaining economic activity and retaining jobs, ” he said.

The figures imply that the sector will generate modest tax receipts this year, only 12 months after the Scottish National party promised voters North Sea oil would help fund independence. Scottish public spending far exceeds its tax revenues, with spending about £1, 300 per head greater than the UK average.

The Scottish government’s independence white paper released in November 2013 claimed that oil revenues for Scotland – which has a 90% geographical share of North Sea receipts – could hit £7.9bn in the financial year 2016/17 alone. That figure was based on a $113-a-barrel oil price.

Fergus Ewing, the Scottish energy minister, declined to make any statement on the fiscal impact of the negative tax revenues but confirmed that his SNP administration supported the UK government’s tax cuts and subsidies. He said those changes would eventually see the sector return to better health.

“The fiscal reforms from the UK government, which the Scottish government has long called for, will encourage additional production and investment that will boost government revenues in the coming years, ” Ewing said. Recent data suggested production was increasing, adding to the potential for higher tax receipts in future.

A senior Conservative party source said the UK government was likely to forgo billions of pounds in taxation and in tax incentives for the sector to help it survive the slump in prices and the financial challenges posed by decommissioning old platforms.

“Once again, this demonstrates the benefit of pooling resources and sharing risks across the UK and how the UK and Scottish government working together can best support one of our major sectors in the years and decades ahead, ” he said.

Jackie Baillie, Scottish Labour’s public services spokeswoman, said it was “remarkable” that the sector had effectively cost taxpayers money for the first time, adding that it raised challenging questions for the SNP’s promises during the independence referendum.

“The dramatic collapse in the oil price, and the devastating impact this would have had on our ability to pay for schools and hospitals, shows we made the right decision to keep Scotland in the UK and reject the SNP’s fantasy economics, ” she said. “The SNP government need to be transparent about Scotland’s finances and the impact falling oil revenues has.”

Gavin McCrone - North Sea Oil and the Economics of ...

David Cameron to boost North Sea revenues by £200bn to ...