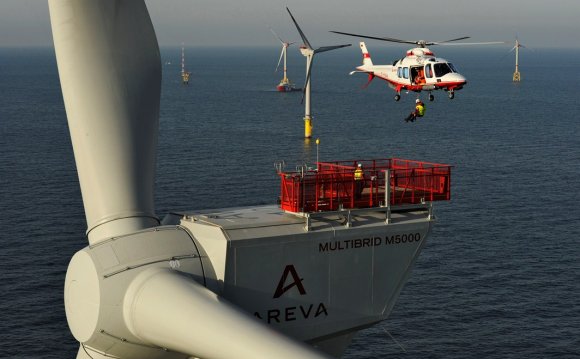 E.ON’s offshore wind farm Amrumbank West has been officially put into operation. During an event at the harbor museum in Hamburg, E.ON Johannes Teyssen, Hamburg’s First Mayor Olaf Scholz, the Parliamentary State Secretary at the Federal Ministry for Economic Affairs and Energy Uwe Beckmeyer, the Mayor of Helgoland Jörg Singer and Project Manager Dominik Schwegmann symbolically started power generation at sea. Under the motto “Energy and climate protection for future generations” the guests of honor were supported during the start-up by children from a Hamburg primary school.

Referring to Amrumbank West as “technology at its best”, Johannes Teyssen called for the continued expansion of offshore wind. “Every energy has its time, and the time for expanding offshore wind is definitely now. Offshore will be needed if we want to achieve the targets of the energy transition.” Teyssen added that E.ON would remain committed to this field of business, focusing in particular on cutting the cost of renewable energy generation.

Hamburg’s First Mayor Olaf Scholz said: “Amrumbank West is another lighthouse project for wind power at sea, which must be followed by further offshore wind projects to make sure the energy industry and industrial policy potential of offshore wind is not left untapped. Hamburg and the federal states of northern Germany support plans to push ahead with the network infrastructure and the construction of further wind farms. Clean power is needed all over Germany and green electricity from the North Sea gives the German energy transition the necessary support.”

State Secretary Uwe Beckmeyer referred to the commercial benefits: “Reliability and a continuous expansion are the cornerstones of the successful development of offshore wind energy. With its wind farm Amrumbank West E.ON is making an important contribution in this sector. The project builds on previous offshore experience and demonstrates that the northern German cluster offers many competitive advantages: the geographical proximity of the companies involved in the project, networking opportunities and collaboration over longer periods. This offers a tremendous learning environment and it creates value and jobs along the coast and far beyond.

The offshore-wind farm Amrumbank West is situated 35 kilometers north of Helgoland. It has an installed capacity of 302 megawatts and can supply about 300, 000 households with renewable energy while helping to reduce CO2 emissions by more than 740, 000 metric tons. E.ON is investing a total of € 1 billion in the project.

Renewables are one of the pillars of new E.ON’s strategy. The other two future business areas are energy networks and customer solutions. At the beginning of the year E.ON spun off its conventional energy assets, most notably conventional power plants and global energy trading into a separate company called Uniper.

This press release may contain forward-looking statements based on current assumptions and forecasts made by E.ON and other information currently available to E.ON. Various known and unknown risks, uncertainties and other factors could lead to material differences between the actual future results, financial situation, development or performance of the company and the estimates given here. E.ON does not intend, and does not assume any liability whatsoever, to update these forward-looking statements or to conform them to future events or developments.
Source: www.eon.com

Cruising about an offshore wind farm