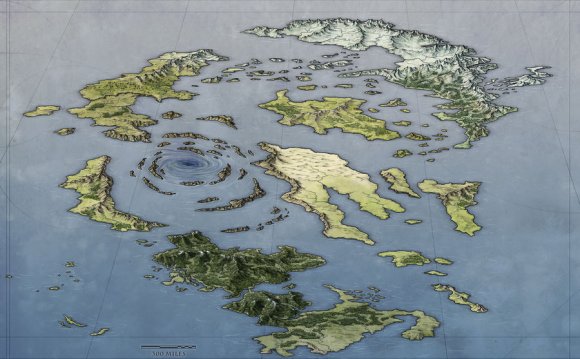 The Bible contains at least two stories equating the aquatic with the amoral. As Red Sea pedestrians, Moses and the Israelites didn’t even get their sandals moist, while the Lord did some expert smiting on the pursuing Egyptians, by way of the gurgling waters closing in on them. And a few thousand years earlier, Noah kept his binary boatload afloat while all the rest of humanity (and the now extinct species of the animal kingdom) met their watery grave.

Even though this map of L’archipel de Palestine orientale (‘The Archipelago of Eastern Palestine’) is set in the same area and uses a similar theme, the cartographer behind it refutes any allegation that it is meant to reflect the same Biblical dry = good, wet = bad analogy. “The map is not about ‘drowning’ or ‘flooding’ the Israeli population, nor dividing territories along ethnic lines, even less a suggestion of how to resolve the conflict, ” gasps Julien Bousac, the Frenchman who created this map.

A small excerpt of the map (focusing on the Greater Jerusalem area) was published a bit earlier on this blog, but the map in its entirety (sent in by Mr Bousac but also earlier by Baptiste Hautdidier) merits a separate entry, not only because “without a legend, it […] gives ground to various misinterpretations, due to the high sensitivity of the subject, ” as Mr Boussac relates – but also because it just looks so nice. And strange, of course.

“Maybe posting the full map would help to take it for what it is, i.e. an illustration of the West Bank’s ongoing fragmentation based on the (originally temporary) A/B/C zoning which came out of the Oslo process, still valid until now. To make things clear, areas ‘under water’ strictly reflect C zones, plus the East Jerusalem area, i.e. areas that have officially remained under full Israeli control and occupation following the Agreements. These include all Israeli settlements and outposts as well as Palestinian populated areas.”

Mr Boussac took advantage of the resulting archipelago effect “to use typical tourist maps codes (mainly icons) to sharpen the contrast between the fantasies raised by seemingly paradise-like islands and the Palestinian Territories grim reality.” The map does have a strong vacationy vibe to it – but whether that is because of the archipelago-shaped subject matter, or due to the cheerful colour scheme is a matter for debate.

Some of the paradisiacally named islands include Ile au Miel (Honey Island), Ile aux Oliviers (Isle of the Olive Trees), Ile Sainte (Holy Island) and Ile aux Moutons (Sheep Island), although the naming of Ile sous le Mur (Island beneath the Wall) constitutes a relapse into the grimness of the area’s reality.

SKYWARS MAP Jungle Archipelago Built by me and Zlux!

Drawing a map of the Fiji Archipelago with a quill