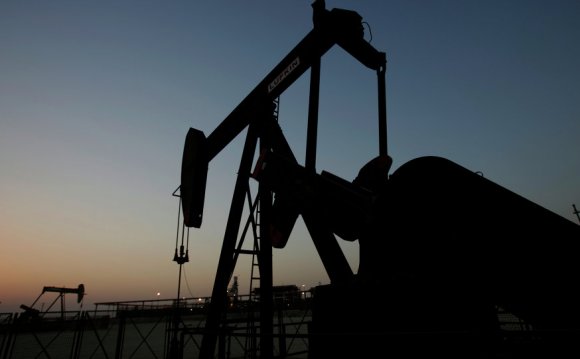 The Brent oil field is estimated to have produced 10% of all North Sea oil and gas and generated £20bn in taxes. Photograph: Michael St Maur Sheil/Getty

For one oil industry veteran, the dismantling of the Brent oil field in the North Sea prompts mixed feelings. There is gratitude for the livelihood earned from Britain’s post-war energy boom. And relief that it means farewell to “hell on Earth”.

“Brent kept me and my family in gainful employment, so I have something to be grateful for, but these platforms are from an era long gone, ” says Jake Molloy, 55, who was a production assistant on the Brent Delta platform.

Describing the structure, which Shell plans to remove from the North Sea, Molloy adds: “Putting people down platform legs [which store pumps and vessels] is really bad. You could climb down thousands of steps to the bottom with 40 pounds of breathing apparatus on your back only for the alarms to go off and you had to go all the way back again. It was the worst working environment – horrendous, hell on earth.”

Shell’s announcement that it plans to remove the platform was just one of many symbolic retreats staged by the oil industry last week. A day after the Brent proposals, Shell’s rival BP said it was taking a $4.5bn (£3bn) hit in its quarterly accounts to pay for the cost of bringing forward the closure of some unprofitable UK fields, partly due to lower oil prices.

Situated 115 miles east of the Shetland Islands, Brent is estimated to have produced 10% of all North Sea oil and gas while generating £20bn of tax revenues since it opened in 1976.

Brent is not the first North Sea field to face decommissioning and BP has been planning closures for some time. But the timing makes the closures all the more pointed. Shell’s field gave its name to a benchmark that has plummeted over the past year. The price of a barrel of Brent crude has dived from $115 in June last year to less than $50 last month.

The price has bounced back in the past two weeks to $58 but Bob Dudley, the chief executive of BP, warned last week that the industry had to prepare for a “new phase” of lower prices that could last months, even years. There will be more cost-cutting moves by the global oil industry over the next 12 months.

BP is halving its exploration activity, slashing its capital expenditure by 20% and spending $1bn on making staff redundant after recording a $1bn loss in the last quarter. The $4.5bn writedown for its North Sea operations includes “increases in expected decommissioning costs” – an accounting footnote viewed by Iain Reid, oil analyst at BMO Capital Markets, as an inevitable outcome of low oil prices.

“It’s bound to lead to North Sea field shutdowns being brought forward, ” he says. “Equally, unless there is a significant amount of tax incentives from government and major service cost reductions, it is going to be hard for companies to sanction new projects in the current environment.”

Shell also said it would reduce costs by $15bn over the next three years, continue with a major divestment programme and freeze its dividend. Texas-based ExxonMobil, the largest stock-market-quoted oil company in the world, reported a 21% slump in three-monthly profits and said it would halve its share buyback programme. BP, Shell and US oil companies such as Chevron and ConocoPhillips have announced plans to cut staff in Britain’s oil capital of Aberdeen by between 200 and 300 each. But few will put a figure on overall global redundancies.

The oil companies have been cancelling drilling rigs and forcing other equipment suppliers to reduce prices. Schlumberger, the world’s largest oil field services group, said last month it would cut 9, 000 jobs worldwide – 7% of its workforce. “The new oil prices are clearly going to test the resilience of several North American land producers going forward, ” Schlumberger boss Paal Kibsgaard says, adding that it will hit “their ability to get financing, their ability to continue to drive efficiencies and reduce costs, and their ability to maintain production at current levels”. Meanwhile, rival Weatherford said it planned to axe 8, 000 jobs globally.

Recruitment firm Challenger, Gray & Christmas said last week that 21, 000 jobs were lost from the US energy sector in January alone.

“The economies throughout the northern United States that have been thriving as a result of the oil boom could experience a steep decline in employment across all sectors, including retail, construction, food service and entertainment, ” said the firm’s chief executive, John Challenger. There could be further damage to the US jobs market, with one survey indicating that more than 40% of oil and gas companies plan to cut back on capital spending, and nearly one third will reduce their search for new talent.

There is also pressure outside the Brent benchmark. The oil price slump comes at a difficult time for the industry, amid a growing campaign for fossil fuels to be kept in the ground to prevent further global warming. For the industry’s sternest critics, the dismantling of the Brent field should be followed by mass decommissioning of oil sites around the world. There is also increasing pressure on pension funds to disinvest from oil and coal companies on the basis that they represent a “carbon bubble” of overvalued and endangered assets.

Jake Molloy: ‘Brent kept me and my family in gainful employment, so I have something to be grateful for, but these platforms are from an era long gone.’ Photograph: Ross Johnston/Newsline Media

Governments whose economies depend on high commodity prices, such as Saudi Arabia, Russia and Venezuela, have most to lose from a price slump. But countries that are dependent on imports – such as China and India – have a lot to gain as cheap energy reduces inflation and makes manufacturing more competitive. Under this scenario, jobs losses in the global oil industry are balanced with gains elsewhere.

That situation could be played out in microcosm in the UK. Ministers are worried about the impact on the domestic oil and gas industry, which is said to support more than 350, 000 jobs, but the economy overall stands to benefit from lower transport and other input costs. The average price of unleaded petrol fell to 106.65p a litre last week, compared with a peak of 131.7p in July last year, according to the AA.

That peak is unlikely to be regained soon. The oil price had been rattling along at over $100 for three years when it began to fall in the middle of 2014, as traders and analysts began to panic about the soaring production from US shale producers.

BP does not see a strong improvement in the oil price soon, although Shell is much more upbeat, despite the looming dismantling of the Brent field. Iain Reid at BMO has pencilled in an average price of $53 for 2015, $65 for 2016 and $80 longer term. But he admits no one is really sure what lies ahead.

Meanwhile Molloy, now a trade union organiser at the RMT, is keen to keep the North Sea fields in operation. But he wants to make sure operators do not use the low oil price as an excuse to cut platform maintenance or compromise safety. And while the former offshore worker remembers working on Brent in 180-knot winds and -17C temperatures, he has warmer memories, too.

“On the odd summer night when the platform was shut down and the [gas] flare was out, it was so dark you could lie on the deck looking up and see the Northern Lights and satellites overhead. People would pay thousands of pounds for that. Fantastic.”