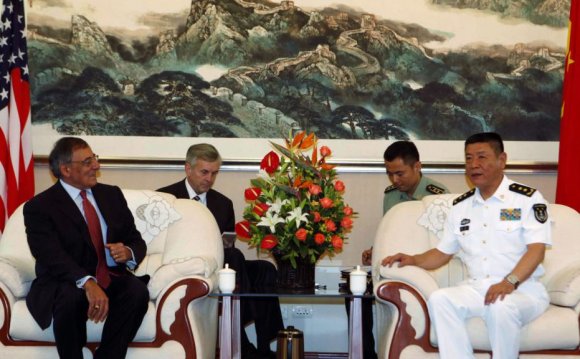 The U.S. military just spotted five Chinese Navy ships off the coast of Alaska, just as President Barack Obama is finishing his three-day tour up north.

While the principal motivation for Obama’s trip was to discuss climate change, he did announce plans to accelerate acquisition of a new icebreaker by two years.

Pentagon officials did not clarify how far off the coast of Alaska the vessels were spotted, but made sure to emphasize that although the incident is an oddity, the activity does not seem threatening.

“It’s difficult to tell exactly, but it indicates some interest in the Arctic region, ” a Pentagon official told The Wall Street Journal. “It’s different.”

From Aug. 20-28, China held a joint exercise with Russia approximately 2, 000 miles west of the Bering Sea. No military statements listed intentions to move the vessels further eastward following the conclusion of the training.

China has shown a certain amount of interest in potential sea routes up north connecting Asia and Europe. Since melting ice is increasing navigable waters, a new trade route may knock several days off existing pathways through the Suez Canal. China joined the Arctic Council as a permanent observer in 2013, though in a meeting Sunday and Monday, Chinese representatives joined India in declining to sign an Arctic climate change statement, perhaps viewing it as being in conflict with its goals for resource development in the region. The United States currently chairs the council.

Deployment near Alaska may constitute a response to lurking U.S. activity in the South China Seas, but it’s unclear at this point. What is clear is that while China has historically used its Navy to patrol its own coast, over the last several years, Chinese leadership has started expanding operations into the Pacific Ocean and the Mediterranean Sea in pursuit of China’s “peaceful rise” in the international arena.

Content created by The Daily Caller News Foundation is available without charge to any eligible news publisher that can provide a large audience. For licensing opportunities of our original content, please contact [email protected]