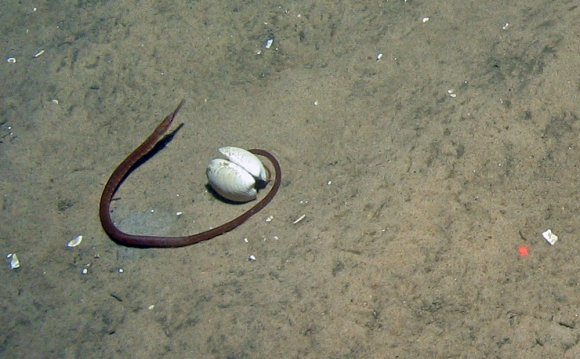 When signs of a lost world at the bottom of the North Sea first began to appear, no one wanted to believe them. The evidence started to surface a century and a half ago, when fishermen along the Dutch coast widely adopted a technique called beam trawling. They dragged weighted nets across the seafloor and hoisted them up full of sole, plaice, and other bottom fish. But sometimes an enormous tusk would spill out and clatter onto the deck, or the remains of an aurochs, woolly rhino, or other extinct beast. The fishermen were disturbed by these hints that things were not always as they are. What they could not explain, they threw back into the sea.

Generations later a resourceful amateur paleontologist named Dick Mol persuaded the fishermen to bring him the bones and note the coordinates of where they had found them. In 1985 one captain brought Mol a beautifully preserved human jawbone, complete with worn molars. With his friend, fellow amateur Jan Glimmerveen, Mol had the bone radiocarbon-dated. It turned out to be 9, 500 years old, meaning the individual lived during the Mesolithic period, which in northern Europe began at the end of the last ice age some 12, 000 years ago and lasted until the advent of farming 6, 000 years later. “We think it comes from a burial, ” says Glimmerveen. “One that has lain undisturbed since that world vanished beneath the waves, about 8, 000 years ago.”

The story of that vanished land begins with the waning of the ice. Eighteen thousand years ago, the seas around northern Europe were some 400 feet lower than today. Britain was not an island but the uninhabited northwest corner of Europe, and between it and the rest of the continent stretched frozen tundra. As the world warmed and the ice receded, deer, aurochs, and wild boar headed northward and westward. The hunters followed. Coming off the uplands of what is now continental Europe, they found themselves in a vast, low-lying plain.

Archaeologists call that vanished plain Doggerland, after the North Sea sandbank and occasional shipping hazard Dogger Bank. Once thought of as a largely uninhabited land bridge between modern-day continental Europe and Britain—a place on the way to somewhere else—Doggerland is now believed to have been settled by Mesolithic people, probably in large numbers, until they were forced out of it thousands of years later by the relentlessly rising sea. A period of climatic and social upheaval ensued until, by the end of the Mesolithic, Europe had lost a substantial portion of its landmass and looked much as it does today.

Many have come to see Doggerland as the key to understanding the Mesolithic in northern Europe, and the Mesolithic, in turn, as a period that holds lessons for us—living as we are through another period of climate change. Thanks to a team of landscape archaeologists at the University of Birmingham led by Vince Gaffney, we now have a good idea of what this lost country looked like. Based on seismic survey data gathered mostly by oil companies prospecting under the North Sea, Gaffney and his colleagues have digitally reconstructed nearly 18, 000 square miles of the submerged landscape—an area larger than the Netherlands.

At the university’s IBM Visual and Spatial Technology Centre, which he heads, Gaffney projects images of this terra incognita onto huge, full-color screens. Just off the map, the Rhine and the Thames met and flowed south into the Channel River. Gaffney sweeps a hand across other river systems, comparably large, that we have no names for. In the climate of the day—perhaps a couple of degrees warmer than today—the contours on his screen translate into gently rolling hills, wooded valleys, lush marshes, and lagoons. “It was a paradise for hunter-gatherers, ” he says.

The publication in 2007 of the initial section of this map allowed archaeologists for the first time to “see” the Mesolithic world, even identify likely locations for settlements, with a view to potentially excavating them. The expense of underwater archaeology and the poor visibility in the North Sea have kept those settlements tantalizingly out of reach, at least for now. But the archaeologists have other ways to reveal who the Doggerlanders were, and how they responded to the inexorable creep of the sea into their homeland.

First, there are the treasures brought up in the fishermen’s nets. In addition to the human jawbone, Glimmerveen has accumulated more than a hundred other artifacts—animal bones showing signs of butchery and tools made from bone and antler, among them an ax decorated with a zigzag pattern. Because he has the coordinates of these finds, and because objects on the seabed tend not to move far from where erosion liberates them, he can be confident that many come from a specific area of the southern North Sea that the Dutch call De Stekels (the Spines), characterized by steep seabed ridges. “The site or sites must have been close to a river system, ” he says. “Maybe they lived on river dunes.”

Another way to understand the Doggerlanders is to excavate shallow-water or intertidal sites of similar age nearby. In the 1970s and 1980s a site called Tybrind Vig, a few hundred yards off the coast of a Danish island in the Baltic Sea, yielded evidence of a surprisingly advanced late Mesolithic fishing culture, including finely decorated canoe paddles and several long, thin canoes, one of them over 30 feet long. More recently, Harald Lübke, of the Centre for Baltic and Scandinavian Archaeology in Schleswig, Germany, and his colleagues have excavated a series of underwater settlements in Wismar Bay, on the German Baltic coast, dating between 8, 800 and 5, 500 years ago. The sites vividly document the people’s shift in diet from freshwater fish to marine species, as the sea rise transformed their land over centuries from inland lakes surrounded by forests, to reedy marshes, to fjords, and eventually to the open bay there now.