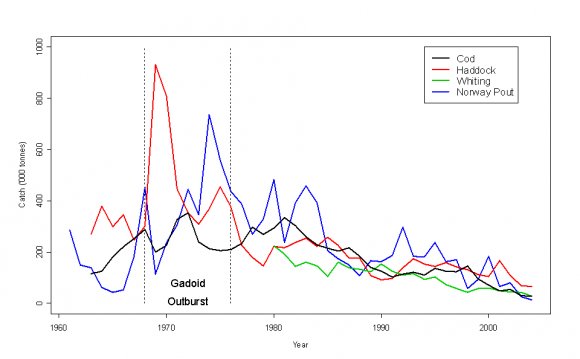 The traditional fish suppers of haddock, lemon sole and plaice are likely to be replaced by the more exotic flavours of red mullet, John Dory and gurnard as the fishing grounds around Britain change due to global warming, a study has found.

The cold-water fish of the North Sea which have been staples of the British diet for generations are being pushed further north while warmer-water fish from the south are moving in, according to research by marine biologists.

The North Sea has seen typical sea-surface temperatures rise by 1.3C over the past 30 years – about four times faster than the global average – and computer models predict a further 1.8C rise during the next 50 years, they said in a study published in the journal Nature Climate Change.

Computer forecasts predict that many cold-water species will be unable to cope with the rising sea temperatures, yet they will be unable to continue migrating further North because the sea becomes too deep and rocky. Meanwhile, many fish species from southern Europe will move in, they said.

“The popular cold-water species, for example dab, haddock, lemon sole and plaice, that we currently fish for have already moved both northwards and deeper over the last 35 years, but our models, constrained by what we know has happened so far, predict that there is little scope for further poleward movement in the North Sea, ” said Steve Simpson, a marine biologist at Exeter University.

“We will see a real changing of the guard in the next few decades. Our models predict cold water species will be squeezed out, with warmer water fish likely to take their place, ” Dr Simpson said.

Migrating further north out of the shallow North Sea into the North Atlantic Ocean poses problems because many fish, such as the dab, cannot survive in deep, rocky areas, but only in shallow seas with muddy or sandy seabeds, he said.

The cold-water fish of the North Sea, staples of the British diet for generations, are being pushed further north (Getty)