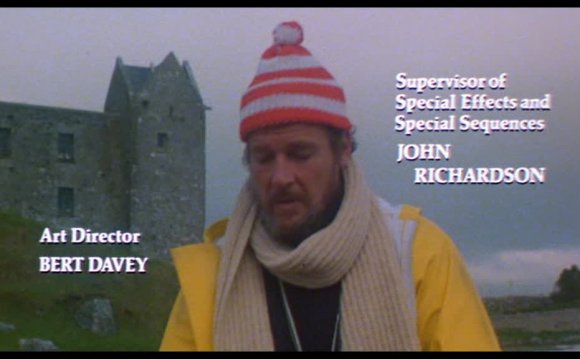 North Sea Hijack (released as Ffolkes outside the UK and as Assault Force on US TV) is a British action film from 1979 starring Roger Moore, James Mason, Anthony Perkins, and Michael Parks. It was directed by Andrew V. McLaglen and adapted by Jack Davies from his novel Esther, Ruth and Jennifer.

This film was a vehicle for both Moore and Perkins to try to escape typecasting. Previously Moore had been practically typecast as a womanising, happy-go-lucky playboy in such series as and James Bond. In contrast to those parts, he is shown here as a bearded, eccentric, arrogant cat-loving, misogynist showing heroic qualities as a master strategist. Moore once said in an interview that he preferred this film to all the James Bond movies he had starred in while acknowledging that he had been miscast in the lead role.

Misogynist freelance marine counter-terrorism consultant Rufus Excalibur ffolkes (Moore) is asked by Lloyd's of London to develop a contingency plan should any of the North Sea oil installations they insure be threatened.

Months later, Esther, a North Sea supply ship, takes on board a group of men posing as reporters who are visiting the oil production platform Jennifer. The leader of this group, Lou Kramer (Anthony Perkins), along with his second-in-command, Harold Shulman (Michael Parks), hijacks the ship, and two scuba diving henchmen attach limpet mines to the legs of Jennifer and its oil drilling rig, Ruth. From the bridge of Esther, Kramer issues a ransom demand for £25 million or he will blow up Ruth; then, if the ransom is still not paid, he will destroy Jennifer. For good measure, he rigs Esther with explosives and has all the charges wired to a control panel that never leaves his side.

Lord Privy Seal Dennis Tipping (Jeremy Clyde) informs the British Prime Minister (Faith Brook) of the situation. The British government is opposed to yielding to terrorist blackmail, but Tipping suggests that, as a compromise, Lloyd's could pay the ransom. After Lloyd's is consulted, the Prime Minister is shown a video of ffolkes practising a rescue mission aboard a mock-up ship. He has anticipated that terrorists might hijack a supply ship and has worked out a plan. Flying out to Jennifer, ffolkes first proposes that, to buy time, a large explosion should light up the night sky, fooling Kramer into thinking Ruth has exploded by accident so that he won't push the button at the deadline. Ffolkes and Admiral Sir Francis Brindsen (James Mason) are to meet with Kramer on board Esther. Ffolkes makes Brindsen practice accidentally dropping cigarettes on the floor, the idea being that the admiral should distract Kramer, giving ffolkes the opportunity to kill him before he sets off the bombs; his team of commandos will in the meantime take out the guards posted on the vessel.

A sub-plot involves the imprisoned crew trying to poison their captors using the ship's medicine supply. A reporter who came with Kramer's men offers to do this, but the crew quickly suspects him to be a plant, so they tie him up. Unfortunately, Kramer has been spying on them, and when the food is delivered he forces one of the "conspirators" to drink the poisoned coffee; Sanna (Lea Brodie), the other main participant and the only woman on board, flees and apparently falls overboard.

Later, Kramer demands that Brinston and King (David Hedison), Jennifer's manager, join him on Esther, unintentionally going along with ffolkes' plan. However, Kramer doesn't trust ffolkes when he meets him and orders him to leave the ship. The reporter who got the blackmailers onto the ship gets cold feet and wants to leave, so Kramer agrees to release him. At the last moment, Kramer shoots him in the back as he is being winched aboard the helicopter.

With time running out, the Prime Minister considers paying the ransom, but ffolkes replies angrily that that would send a message that "anyone with a rowing boat and a stick of dynamite could hold this country to ransom." Ffolkes still thinks he can rescue the hostages. However, to save the lives of the 1, 200 men and women aboard Jennifer, ffolkes urges that Esther be obliterated with a bomb if his team cannot rescue the hostages in time.