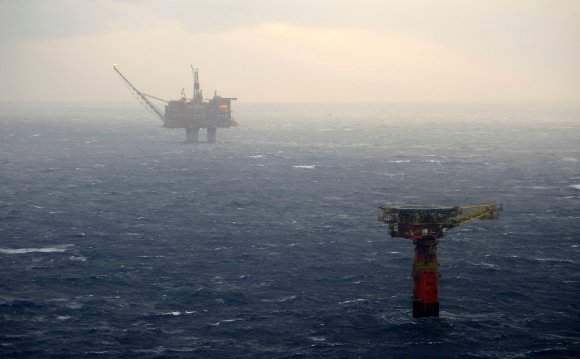 Oil prices closed higher on Thursday after the release of weekly rig count data, but still recorded a second year of steep declines after a race to pump by Middle East crude producers and U.S. shale oil drillers created an unprecedented global glut that may take through 2016 to clear.

U.S. crude rigs fell by 2 this week, and now total 536, according to Baker Hughes. Oil rigs in the U.S. have fallen by 946 in the last year, Baker Hughes said.

Global oil benchmark Brent and U.S. crude's West Texas Intermediate (WTI) futures were on track finish 2015 down more than 30 percent after another year that showed the helplessness of Saudi Arabia and others in the once-powerful Organization of the Petroleum Exporting Countries (OPEC) to support oil prices.

The U.S. shale industry, meanwhile, surprised the world again with its ability to survive rock-bottom crude prices, churning out more supply than thought, even as the sell-off in oil slashed by two-thirds the number of drilling rigs in the country from a year ago.

The United States also took a historic move in repealing a 40-year ban on U.S. crude exports to countries outside Canada, acknowledging the industry's growth.

Brent turned positive Thursday as a fierce storm in the North Sea forced oil firms to evacuate platforms and shut down production on Thursday on concerns that they could be hit by a drifting barge that had broken its anchor.

The storm is severe enough to lend support to Brent in a market that desperately needs a catalyst to stabilize prices, Kilduff told CNBC.

"It won't be lasting.The infrastructure there can well withstand what's being thrown at it currently, " he said.

Also on Thursday, President Hassan Rouhani ordered his defense minister on Thursday to expand Iran's missile programme, in response to a U.S. threat to impose sanctions over a ballistic missile test Iran carried out in October.

While it is not clear whether the escalation could halt the lifting of Iranian sanctions, and therefore Iran's ability to bring oil to market next year, the development contributes to end-of-the-year jitters, Kilduff said.

The immediate outlook for oil prices remains bleak. Goldman Sachs has said prices as low as $20 per barrel might be necessary to push enough production out of business and allow a rebalancing of the market.

Morgan Stanley said in its outlook for next year that "headwinds (are) growing for 2016 oil." The bank cited ongoing increases in available global supplies, despite some cuts by U.S. shale drillers.

"The hope for a rebalancing in 2016 continues to suffer serious setbacks, " the bank said.

Brent prices briefly hit a 2004 bottom below $36 this year, effectively wiping out the gains from a decade-long commodity super-cycle sparked by China's unprecedented energy demand boom.

The downturn has caused pain across the energy supply chain, including shippers, private oil drillers and oil-dependent countries from Venezuela and Russia to the Middle East.

Analysts estimate global crude production exceeds demand by anywhere between half a million and 2 million barrels every day. This means that even the most aggressive estimates of expected U.S. production cuts of 500, 000 bpd for 2016 would be unlikely to fully rebalance the market.

Oil began falling in mid-2014 as surging output from OPEC, Russia and U.S. shale producers outpaced demand. The downturn accelerated at the end of 2014 after a Saudi-led OPEC decision to keep production high to defend global market share rather than cut output to support prices.

OPEC failed to agree on any production targets at its Dec. 4 meeting in Vienna, cementing its decision to protect market share, as the organization braces for the return of Iranian exports to the market after the lifting of Western sanctions.

Russia and OPEC show no signs of reining in production, leading traders to establish record high active short positions in the market that would profit from further crude price falls.

BP Not Giving Up On The North Sea Just Yet