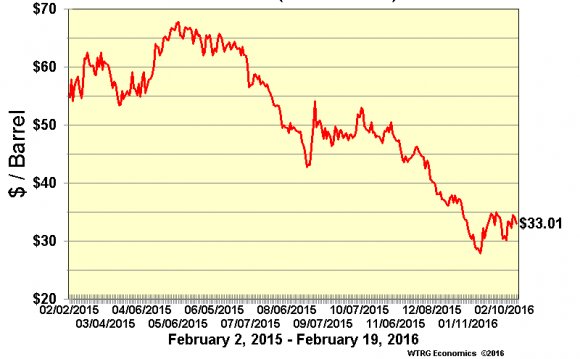 Western Texas Intermediate had a good run while it lasted, but now that ride is over.

If we're going to be honest here, the fate of WTI was sealed years ago — and the latest proclamation that Brent crude has overtaken WTI as the global benchmark should be little more than an afterthought.

The rise of Texas Tea started back in the early 1980s, when the U.S. government's decontrol of oil prices changed the trading mechanics of crude oil, which led to the commoditization of WTI.

At the time, our domestic production was flowing at a rate of 8.6 million barrels per day, with approximately 30% of that oil coming from Texas.

What's more, it was some of the highest-quality crude that U.S. refiners could get their hands on...

But as the recent headlines have stated, WTI's reign as the global oil benchmark was recently overthrown by Brent crude.

Why did Brent officially take over?

Simply put, the preference for Brent crude today stems from the fact that it may be a better indicator of global oil prices. Brent essentially draws its oil from more than a dozen oil fields located in the North Sea. It's also still considered a sweet crude, despite having a higher sulfur content than WTI.

Although most Brent is destined for European markets, it's already used as a price benchmark for other grades.

Bloomberg reports: “Brent represents the Northwest Europe sweet market, but since it's used as the benchmarks for all West African and Mediterranean crude, and now for some Southeast Asia crudes, it's directly linked to a larger market."

For years, the price differential between the two has only been a few dollars.

Every now and then, a shortage could push the price spread wider... but the divergence has been more drastic since 2010:

The problem for WTI has been the flood of oil flowing into Cushing from areas like North Dakota and Canada. We talked about the production boom taking place in North Dakota last week. As for Canada, imports have risen to record levels over the last few years — now around 3 million barrels per day.

Brent becoming the new global benchmark is something we've seen coming for years. And we weren't the only ones with this foresight...

The Saudis ditched WTI as a benchmark along with Kuwait back in 2009 for the heavier Argus Sour Crude Index (ASCI), based off the medium sour crude from the Gulf of Mexico. Iraq followed suit about a year later.

Considering WTI is treading water between $80 and $95 per barrel since, Brent is certainly closer to the OPEC basket:

It's also becoming the more popular go-to crude. As we pointed out a few weeks ago, Brent options have increased more than 300% in 2012.

So does the 'official' ousting of WTI as the global benchmark mean the end for Texas Tea?

Isn't the crude flowing out of Western Texas from here on out the same light, sweet, conventional oil we've enjoyed in the past?

Take a closer look at crude production in West Texas, and you'll find that isn't the case.

West Texas Intermediate may not be a better indication of global prices than Brent, but it's a clear reflection of where the U.S. oil industry is headed.

Texas oil production is absolutely dominated by the Permian Basin. Located in West Texas, it holds the wells that gave the WTI its reputation as oil of the highest quality: light, sweet, and easy to refine.

Almost three-quarters of the state's production comes from the Permian Basin (more than one-tenth of the entire country's, too!). That's a significant contribution, considering Texas is far and away the largest oil-producing state in the U.S.

Much of the recent production increase, however, is coming from unconventional fields — like the Spraberry field shown below (note how the other top fields are still declining).

Oil has been flowing from wells in the Permian Basin for nearly a century, producing more than 29 billion barrels since the first well was completed in Mitchell County.

But it's still a much rosier outlook than the companies drilling in the North Sea, where production peaked more than 20 years ago:

Rather than sit back and watch our unconventional oil boom continuously break new production records, maybe it's time you beat Wall Street to the profits...