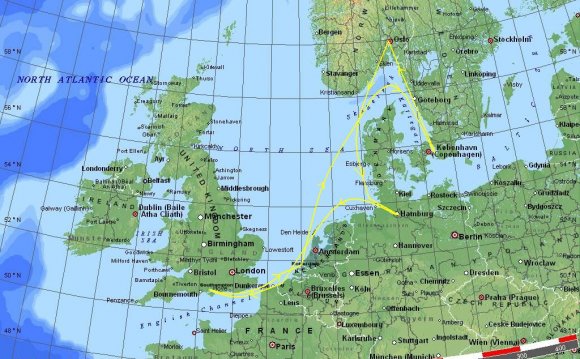 A geo-archaeologist from Lampeter is part of a team hoping to map an ancient land lost under the North Sea about 7, 500 years ago.

Dr Martin Bates from the University of Wales Trinity Saint David will investigate an area off the coast of Norfolk known as Doggerland.

During the last Ice Age it was part of a dry basin which linked Britain to mainland Europe.

But it was gradually flooded as the ice sheets melted.

The project will bring together techniques of digital underwater mapping, carbon dating and DNA analysis to create a three dimensional computer model of the landscape and the people who would have lived there.

"Over an average 40-year life expectancy individuals would have noticed very little change in the landscape as the ice melted, but within that gradual process there would have been more sudden events such as flash floods and tsunamis.

"To say Doggerland was abandoned puts too much of a negative spin on it. There would certainly have been areas they were forced to abandon, but they were mobile people who adapted quickly to the new coastline, and learnt to exploit the shell fish and marine resources."

The idea of a lost land roughly the size of Ireland was first mooted during the late 19th Century. However it was during surveying for the North Sea oil and gas industry that its full extent became apparent.

Dr Bates's team will drill up to six metres deep to remove cores from the seabed for analysis.

"The thing which is new about this project is that we'll be able to use DNA to learn not just about the people who lived there, but also the plants and animals they survived on, and during which periods they moved around the area.

"The seabed is like a timeline, the deeper you drill the further back in time you go, so we'll not only be able to create a physical map, but also a sense of how it changed over time."