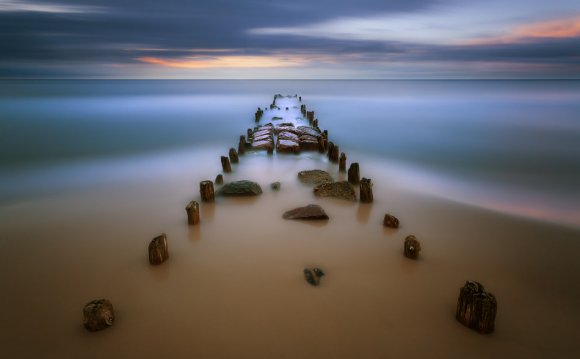 A cry of “Tea... coffee!” in Polish is not something you’d expect to hear while sunning yourself at a European beach resort, from a man selling drinks to bathers. In Greek, perhaps; Spanish, maybe; but not Polish.

Take Kołobrzeg (pronounced ko-wob-zhek), a small Polish city which has all the trappings of an old-time beach resort: wickerwork beach chairs for hire, spa treatments, and beer gardens placed on outdoor decks all over town. It’s also cheaper than its more famous rivals, which is partly why it’s packed with German and Polish holidaymakers, though the word doesn’t seem to have spread further than these countries.

And of course it has the “Kawa! Herbata!” man. He’s just as likely to sidle up and produce a can of beer from some hidden compartment in his satchel, whispering “Piwo?” in a tempting manner on a hot sunny day.

A history of conflict (and amber)

Despite its relaxed old-time feel, Kołobrzeg hasn’t had an easy time of it in the past few centuries. As the German city of Colberg, it was slap bang on the invasion route for a number of armies, including that of Napoleon. The titanic battle between Nazi Germany and the Soviet Union’s Red Army for the city at the end of World War II left the city in ruins.

But that was then. In the 21st century, Kołobrzeg has resumed its 19th century role as a sleepy but pleasant seaside resort.

In its city centre back from the coast, a number of historic attractions survived WWII and are worth a look: a 14th-century cathedral, a solid old town hall, a good history museum and a surprisingly interesting military museum. There’s also the Powder Tower, a striking 15th century fragment of the original city walls, at which the occasional medieval fair is staged.

But this is a beach town, and nowhere is more symbolic of its identity than the promenade above the sands, crammed with stalls selling all manner of cheap holiday novelties to browsing vacationers.

The stock includes much amber, sold both as raw chunks and as neatly fashioned jewellery. It’s an apt place to browse this fossilised tree resin that resembles gemstones, as the majority of the world’s amber is found along the shores of the Baltic Sea. In both white and gold varieties, it’s a popular faux-gemstone in fashion accessories.

Attractions on the sand

However, the real treasure here is the beach. In contrast to outsiders’ default mental picture of the Baltic coast as cold and grey, this is a top-notch stretch of sand, white and gleaming when the sun is out. There’s not much industry in this part of Poland, so there’s little pollution in the water ­- though to be frank, it’s too cold to swim in until July. From the port, an incongruous - or maybe not so incongruous - replica Viking ship takes holiday-makers on regular excursion cruises, a faint reminder of the long-gone era when Scandinavian ships on the horizon could be a disturbing prelude to raids.