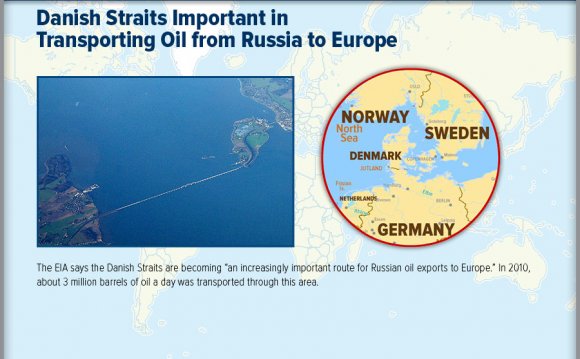 Are the three sea channels between Denmark and Sweden connecting the Baltic Sea to the North Sea through the Kattegat and Skagerrak. The three chief sea passages are:

Oresund is the eastern-most of the Danish Straits, separating the Danish island of Zealand (Sjaelland in Danish) from the Swedish mainland.

Oresund. The dashed lines at the top and bottom indicated the northern and southern limists of the Oresund. Base map source: DEMIS At its narrowest, between Helsingor'/Elsinor (Demark) and Helsingborg (Sweden), the Oresund is approximately 2.5 miles (4 kilometres). A ferry connects the two sides, but the construction of a tunnel is under consideration.

In 1991, the governments of Denmark and Sweden agreed to build a bridge to connect the two countries across the Oresund Strait.

The 16-kilometre-long Oresund Link between Malmo, Sweden (right), and Copenhagen, Denmark (left), was completed and opened to traffic in 2000.

This image of the Oresund Link was acquired April 10, 2004. The large image is centered near 55.6 degrees North latitude, 12.7 degrees East longitude, and it covers an area of 50.8 by 25.9 kilometers. Deep water appears dark blue, shallow water appears bright blue, vegetation appears green, and developed or paved areas appear white. Several white specks in the waters of the Strait are boats or ships. . Source: NASA/GSFC/METI/ERSDAC/JAROS, and U.S./Japan ASTER Science Team

Storebælt (Great Belt) is the middle and widest strait of the three main Danish Straits. It passes between between the main islands of Zealand (Sjælland) and Funen (Fyn). Being the widest, it is the main channel for vessels passing between the Baltic Sea and the North Sea.

South of the Great Belt is the Bay of Keil which lies off the north coast of Germany. The Baltic Sea to the east is reached through the Fehmarn Belt.

A suspension bridge (4.2 miles, 6.8 km "East Bridge") carries a road from Korsor to Sprogø, while two connected tunnels convey the rail link. The suspension bridge has the world's third longest main span: 5328 feet or 1624 m, under which the main shipping lanes pass.

A "box girder" bridge (4.2 miles, 6.6 km "West Bridge") connects Sprogø to south of Nyborg. This bridge has two separate spans, one for rail and one for road traffic. The Link openned in 1998.

Lillebælt (Little Belt) is the western most and narrowest of the straits. As such it is not generally used by larger vessels.

The strait is at its narrowest (just 800 metres) between the island of Funen (Fyn) and the mainland of Denmark (Jutland), where it crossed by two bridges:

About three million barrels per day (bbl/d) flowed through this waterway in 2010, with most of this product moving westward. Russia has increasingly been shifting its crude oil exports to its Baltic ports, especially the relatively new port of Primorsk, which accounted for half of the exports through the Straits. An estimated 0.3 million bbl/d of crude oil, primarily from Norway, flowed eastward to Scandinavian markets.

About one-third of the westward exports through the Straits are for refined products, coming from Baltic Sea ports such as Tallinn (Muuga), Venstpils, and St. Petersburg.