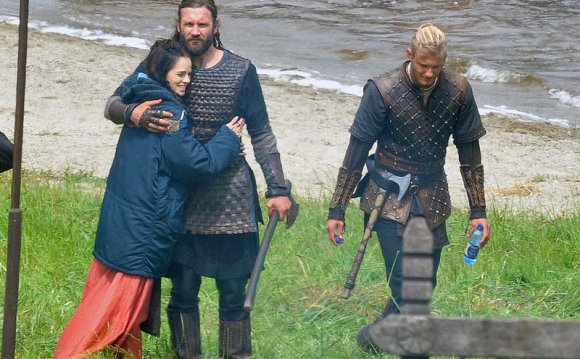 Vikings, the History Channel’s entertaining rival to Game of Thrones, returns to our screens in late February. This is another show filmed in Ireland and displaying the country to good affect.

Perhaps surprisingly, both seasons of Vikings have been almost entirely shot in Ireland. I say surprisingly because one doesn’t necessarily think of Ireland when one thinks of immense mountain vistas. However, the producers found some awesome locations in the Wicklow Mountains that didn’t take much camera trickery to make look enormous and majestic.

About 70% of season one was shot in the great outdoors, much on and around Lough Tay (sometimes called Guinness Lake, as it’s part of the Guinness estate) in Co. Wicklow. The steep slopes of Luggala Mountain look appropriately Scandinavian, and the lake itself provides the perfect location for filming scenes on board the Viking longships (although the finished scenes require a combination of green-screen shots from the soundstages of Wicklow’s Ashford Studios and footage captured on Lough Tay and off the Wicklow coast).

In the summer of 2013, the production company built an extensive set on the shore of Lough Tay, including several Viking houses and a long boat skeleton. A wooden jetty protrudes into the lake and several longboats could regularly be seen moored there during shooting. (In the picture above, this set can be seen in the lower right corner of the lough. Another longboat set is visible on the lower left.)

Also close to Luggala, Lough Dan is a longer lake with a slightly different topography. Surrounded by several forest plantations, and gentler slopes than Lough Tay, Lough Dan allows the production access to many different backdrops and types of terrain.

Although everything looks very remote on film, in reality these locations are not very far from good roads, but the main road is over a ridge, so it doesn’t impinge on view. Luggala and the two lakes abut the Wicklow Mountains National Park, so development is sparse and any anachronisms can be easily camouflaged.

Powerscourt Waterfall (which is just on the other side of the Wicklow Mountains National Park) can be seen unenhanced several times in the first season, especially as the crew prepare for their first voyage in Floki’s new longboat. I don’t know that any scenes were filmed there, but it’s an iconic view of Co. Wicklow that proved irresistible to the filmmakers.

Visitors who enjoy hiking can see what made the filmmakers fall in love with these locations up close and personal as the Wicklow Way goes right past Loughs Tay and Dan. Beginning in South County Dublin, the Wicklow Way meanders through the Wicklow Mountains for 127 km and ends in Co. Carlow.

The Knockree to Roundwood section of the trail will take you past the main shooting locations. Beginning with spectacular views from above the Powerscourt Waterfall, the trail takes you through the heart of the Wicklow Mountains National Park and through the woods leading down to Lough Tay (the picture above was taken from the path), and into the picturesque village of Roundwood. This section is 18m (just over 11 miles) long, and most fit hikers can complete it in a day.

Unlike the many, these Vikings locations are quite close together and can be enjoyed over one energetic day’s walking. If you don’t want to hike the Wicklow Way, simply stay in nearby Roundwood and stroll along the last two miles of the trail. If a third season is confirmed, hikers on the Wicklow Way will likely get a bird’s eye view of filming during the summer of 2014.