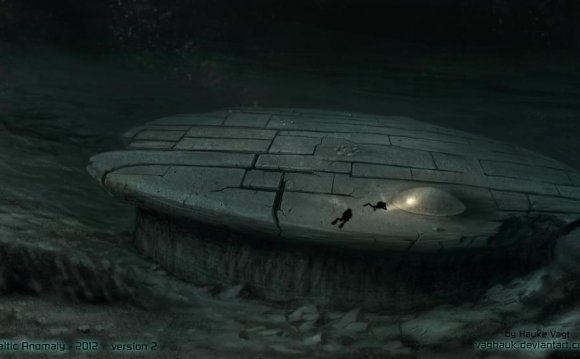 Last year, a mysterious UFO-shaped 60-foot disc was discovered in the bottom of the Baltic sea by a Swedish ocean exploration team using sonar. Now, that same team has managed to get near it and take photographs. According to diver Stefan Hogeborn, it's unlike anything they've ever seen:

During my 20-year diving career, including 6000 dives, I have never seen anything like this. Normally stones don't burn. I can't explain what we saw, and I went down there to answer questions, but I came up with even more questions.

At first, the divers thought that the disc was just some kind of rock cliff. But closer observations revealed something different:

The object appeared more as a huge mushroom, rising 3-4 meters/10-13 feet from the seabed, with rounded sides and rugged edges. The object had an egg shaped hole leading into it from the top, as an opening. On top of the object they also found strange stone circle formations, almost looking like small fireplaces. The stones were covered in something resembling soot.

The divers say that there is a 985-foot-long path that can be described "as a runway or a downhill path that is flattened at the seabed with the object at the end of it."

Peter Lindberg, who is one of the founders of the Swedish Ocean X Team, has always been clear that they are not claiming that this is a spaceship of any kind. They don't, though, know what it is:

First we thought this was only stone, but this is something else. And since no volcanic activity has ever been reported in the Baltic Sea the find becomes even stranger. As laymen we can only speculate how this is made by nature, but this is the strangest thing I have ever experienced as a professional diver.

These guys are not a bunch of crazy UFO hunters, but a company that finds sunken ships and retrieves their contents for profit. In 1997 they found the ship Jönköping, which was loaded with 2.500 bottles of an amazing champagne: Heidsieck&Co Monopole 1907 "Gout Americain" dedicated to the Russian Imperial Fleet. They sold those bottles for $13, 000 a pop.

The strange disc was found on June 19 2011, at 285 feet below the surface of the Botnia Gulf, which is located somewhere between Finland and Sweden in the Baltic. From the images, it appears to be an extremely smooth rock-like surface.

The shape may remind you of the Millennium Falcon, and the tracks seem to suggest the object destroyed part of seabed on its way to its final position. But this could be anything, including a geological formation or, as Lindberg said at the time of its discovery, some archeological find, a "new Stonehenge." But that explanation doesn't make much sense.

UFO-like Disc Found at the Bottom of Baltic Sea