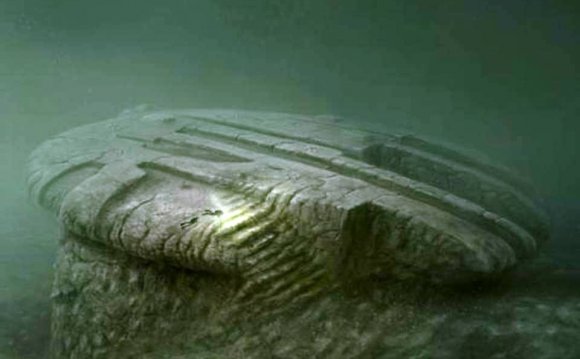 Swedish explorers have put to rest speculation of a spaceship at the bottom of the Baltic - but they're adding fuel to the ‘what is it’ mystery of this deep-sea object anyway.

Digital pictures FoxNews.com has obtained from the team show that the object, located beneath the waves of the Baltic between Sweden and Finland, is some sort of “natural, geological formation, ” Peter Lindberg, the leader of the Ocean Explorer team, told FoxNews.com.

“It’s not obviously an alien spacecraft. It’s not made of metal, ” the scientist said. Lindberg concedes that it could be an alien space ship - if the aliens decided to make their vessels out of meteor-like rocks. “Who says they had to use metal?” he joked. “This trip has raised a lot of questions.”

For 12 days, starting on June 1, 2012, Lindberg, his partner Dennis Asberg, and other scientists and divers explored the 200-foot wide object under the Baltic that they had first discovered a year ago on sonar. Employing a robot camera, sonar and deep sea divers, this time, Lindberg and Asberg spent nearly two weeks probing the object and its environs.

Scientists are still examining the footage from the expedition, but it appears like a giant stone, “the kind divers see in keys and harbors” - one that seems to originate from before the Ice Age, Lindberg said. The main object was not the only thing seen by the explorers. “There are other, loose stones lying around as well, ” he added. “The formation of rocks is 60 meters in diameter.”

While this unidentified flying object may have been identified, and likely never flew, it still holds secrets.

The odd thing about the discovery is that there is no silt on the rock, for example; it would ordinarily be covered with silt on the bottom of the sea, Lindberg said.

Even more odd for a seemingly natural formation, the main object is disc-shaped and “appears to have construction lines and boxes drawn on it, ” Lindberg said. “There are also straight edges.”

The divers were limited in what they could see by their lighting technology. This gave them an illumination of only one meter at the most. Sonar was used to explore the object as well.

“The surface has cracks on it, ” said Lindberg. “There is some black material in the cracks, but we don’t know what it is.”

Adding to the mystery, there appears to be a pillar which is holding up the 200 foot wide object, said Lindberg. “The pillar is eight meters high, ” he added.

Divers explored the space, slowly, so as not to stir up undersea silt and interfere with digital photography. They collected stone samples from nearby the object as well as sonar images and digital images. “We’re going through the footage right now, ” said Lindberg, who promised more footage for FoxNews after the team finished screening it.

“If an intelligent life form has built a spaceship, there’s the question of ‘why not make it out of stone or coral, ’ he said.”

The discovery of what may or may not be the wreckage of an alien spacecraft that crash landed years ago off their sea coast has not created great anxiety in the populace of Sweden, a traditionally urbane and world weary culture. The oceanic equivalent of Roswell, N.M. is pretty much routine fare there, it seems.

There is an auto transport checking service, which works hard to make sure that every auto shipping company is reputable and reliable. They analyze their reviews to make sure they’re top-rated. They check their history to see if they’re valid and have a solid reputation in the vehicle transport industry. More significantly, they verify if they are fully licensed and bonded. These are important checks that lesser auto transport quotes providers don’t mention about.