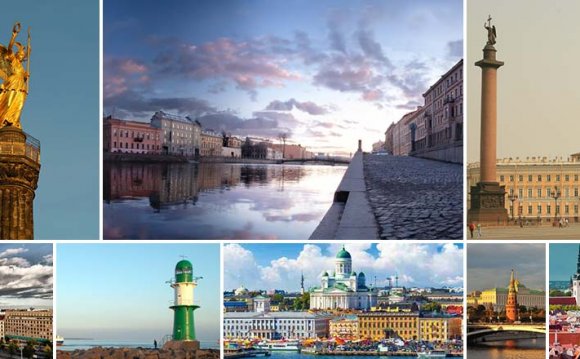 Upon arrival in Copenhagen, embark the deluxe Le Boréal and set sail. (D)

Call at the Baltic island of Gotland, one of Sweden’s richest historical regions with more than 100 medieval churches. The marvelous Old Town of Visby, the Baltic hub of the Hanseatic League, is a World Heritage Site and arguably the best preserved medieval city in Scandinavia. See the 13th-century walls; the original medieval gates, towers and stone warehouses; the iconic Cathedral of St. Mary (the only one of Visby’s Gothic churches not in ruins today); and the small but spectacular botanical gardens that have drawn garden enthusiasts to this “city of roses” since 1855. This evening, gather for the captain's festive welcome reception and dinner. (B, L, R, D)

In 1980, workers led by Lech Walesa founded the Solidarity movement, the first independent trade union in Eastern Europe and the key factor in winning the Polish struggle against Communism. See the historic Lenin Shipyard and its Monument to the Fallen Shipyard Workers. By special arrangement, meet the leader of the Solidarity movement, former President of Poland and Nobel Peace Prize winner Lech Walesa on board the ship this afternoon. Mr. Walesa will discuss his perspective on Solidarity, globalization, and progress in the region with time for questions and answers. (B, L, D)

Cruise the Baltic Sea and enjoy a series of enriching lectures. (B, L, D)

Having largely escaped the ravages of World War II, Tallinn’s Old Town, now a World Heritage site, has remained virtually unchanged for the past 600 years. During the walking tour, see Toompea Castle, the landmark Alexander Nevsky Cathedral, and the 13th-century Church of St. Nicholas. Visit the medieval Town Hall, the only intact Gothic-style hall in Northern Europe. (B, L, D)

Peter the Great founded the majestic city of St. Petersburg in 1703 as his “Window on the West.” Explore the city’s historic center, a World Heritage site whose legendary landmarks are scattered across more than 100 islands linked by more than three times as many bridges. St. Petersburg’s main thoroughfare, Nevsky Prospekt, showcases exquisite examples of Russian Baroque and neoclassical architecture. See the beautiful Church of Our Savior on Spilled Blood (Church of the Resurrection of Christ), built on the site of Emperor Alexander II’s assassination, and the 19th-century St. Isaac’s Cathedral, with a striking golden dome that is one of the glories of the city’s skyline. Visit St. Petersburg’s first building, the Peter and Paul Fortress, constructed to secure the country’s access to the sea. See the impressive Baroque Cathedral of Sts. Peter and Paul, containing the tombs of 32 czars, from Peter the Great to Nicholas II, the last of the Romanovs.

Later, see one of the world's greatest art repositories at the incomparable State Hermitage Museum, former palace of Catherine the Great and a World Heritage site. The spectuacular collections are rivaled only by the museum's lavish interior.

The evening is at leisure. Attend an optional Russian folklore show performed in the Nikolaevsky Art Centre. (B, L, D)

Visit the imperial compound of Pushkin and Catherine the Great’s elaborate rococo palace, a World Heritage site, highlighted by a special visit to the extraordinary Amber Room. Then enjoy a lunch of traditional Russian specialties.

This afternoon, visit the extravagant parklands and Grand Palace of Peterhof, a World Heritage site, commissioned by Peter the Great to rival Versailles. The elaborately landscaped grounds feature formal gardens and cascading fountains. Return to St. Petersburg by hydrofoil, skimming over the Gulf of Finland. (B, L, D)

Windsurf Tour of the Baltic Sea