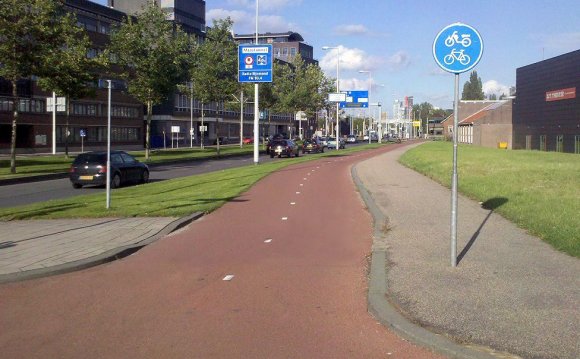 A section of a bike path that uses solar cells to produce electricity is opening for full-time use Wednesday. SolaRoad hide caption

A section of a bike path that uses solar cells to produce electricity is opening for full-time use Wednesday.

A Dutch project that integrates solar panels into a bike commuter path will officially open this week, on a special roadway outside Amsterdam. Power generated by the SolaRoad's panels will be funneled into the national energy grid.

The project in the town of Krommenie is being called the world's first public road that includes embedded solar cells. The crystalline silicon solar cells are encased in two layers of tempered safety glass, mounted in a concrete housing.

The equipment is part of pre-built concrete slabs that SolaRoad says have been refined in years of testing. The company says it's been a challenge to produce energy-producing slabs that are both durable and rideable by thousands of cyclists a day.

"It has to be translucent for sunlight and repel dirt as much as possible, " the company says. "At the same time, the top layer must be skid resistant and strong enough in order to realize a safe road surface."

The section of the path that's opening this week is some 230 feet long. Its creators call it a test of an idea that could someday lead to roads that generate the same power that electric cars use to travel on them.

Workers are seen installing a portion of SolaRoad, a project north of Amsterdam that will test the use of roadways to generate electricity. SolaRoad hide caption

Workers are seen installing a portion of SolaRoad, a project north of Amsterdam that will test the use of roadways to generate electricity.

The researchers say the portion of the path that's opening Wednesday could meet the electrical demands of two or three houses for a year.

Because they lie flat instead of being angled to take optimal advantage of the sun, the path's panels will produce about 30 percent less power than similar panels might produce on a rooftop. But the researchers also note that with around 87, 000 miles of roadways, Holland's total road surface area is "significantly larger" than that of rooftops that could host solar panels.

SolaRoad is a collaboration led by the research group TNO and the government of the province of North Holland. You can read more about its technical aspects at the Phys Org site, which reports that most of the $3.7 million cost was paid by the local authority.

This isn't the only project that tries to integrate electricity into roadways. In the U.S., an Indiegogo campaign for the Idaho-based Solar Roadways project raised $2.2 million earlier this year to pursue a more elaborate vision. It would integrate features such as LED lights and heating elements into structurally engineered road panels, as CNN reported in August.

And as we reported last summer, a city in South Korea has been testing its OLEV (Online Electric Vehicle) system, which uses special sections of road to recharge electric-powered buses, enabling them to carry less weight in batteries.

Smooth bike path in the countryside of the Netherlands