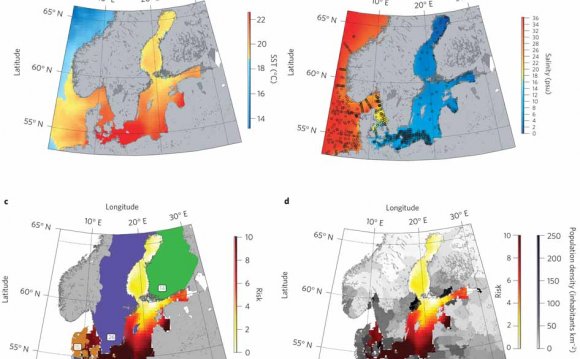 We modelled the surface water salinity in the Baltic from the 1960s to 2100.

The results suggest a critical shift in the salinity range 5–7, which is a bottleneck for both marine and freshwater species distribution and diversity.

This foreseen salinity change is likely to have large impacts on marine ecology, it́s monitoring, modelling as well as fisheries.

Substantial ecological changes occurred in the 1970s in the Northern Baltic during a temporary period of low salinity (S). This period was preceded by an episodic increase in the rainfall over the Baltic Sea watershed area. Several climate models, both global and regional, project an increase in the runoff of the Northern latitudes due to proceeding climate change. The aim of this study is to model, firstly, the effects on Baltic Sea salinity of increased runoff due to projected global change and, secondly, the effects of salinity change on the distribution of marine species. The results suggest a critical shift in the S range 5–7, which is a threshold for both freshwater and marine species distributions and diversity. We discuss several topics emphasizing future monitoring, modelling, and fisheries research. Environmental monitoring and modelling are investigated because the developing alternative ecosystems do not necessarily show the same relations to environment quality factors as the retiring ones. An important corollary is that the observed and modelled S changes considered together with species’ ranges indicate what may appear under a future climate. Consequences could include a shift in distribution areas of marine benthic foundation species and some 40–50 other species, affiliated to these. This change would extend over hundreds of kilometres, in the Baltic Sea and the adjacent North Sea areas. Potential cascading effects, in coastal ecology, fish ecology and fisheries would be extensive, and point out the necessity to develop further the “ecosystem approach in the environmental monitoring”.

Low salinity (S) forms a threshold for marine and freshwater species distributions in river mouths, estuaries, fjords, lagoons, and coastal seas. A direct control of marine species distributions, through osmoregulation, was earlier focused on in marine biological research, which included seminal studies in the Baltic Sea area dating back to the 1930s. This issue was later updated by . The regulating effect of S on invertebrates is summarized by and . The anticipated climate change in the northern coastal areas brings S back into focus. Regional projections concerning global change concentrate on the effects of increased temperature and eutrophication (, and ), however, they also point out a decrease of S in northern coastal areas. reviews pelagic fish, deep water benthos, and plankton populations in relation to recent S and demonstrate the profound effect of S changes in the Baltic Sea pelagic and deep water biota. However, there are several reasons to focus on the sea surface S (SSS). The shallow bottom and littoral habitats are directly affected by changes in surface S. The surface layer is ecologically and economically crucial since all primary production takes place there and the secondary production also is greatly dependent of this zone.