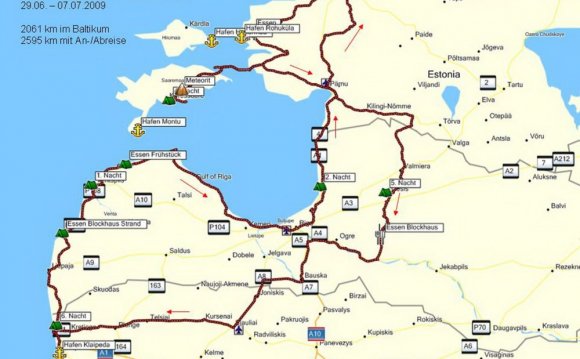 The is a brackish body of water that is considered a sub-basin of the Baltic Sea. The areal extent of the Gulf of Riga is approximately 16, 300 km². Also known by the name Bay of Riga, this is a very shallow sea, with a maximum depth of 67 metres. Expansive areas of the coastal fringe can form dense surface ice during periods of prolonged winter cold.

Descriptively the Gulf of Riga lies above the country of Latvia from Kolka Point to the northern Baltic shoreline of the Latvian coast.

The International Hydrographic Organization prescribes the boundaries of the Gulf of Riga as a line running from Ov?ši [Lyser Ort] (57°34'N) in Latvia to the south extreme of the Island of Saaremaa [Ösel], thence running through Saaremaa to Pammana Point [Pammerort] (22°34'E), thence to Emmaste Point, the south extreme of Hiiumaa [Dagö], through Hiiumaa to Tahkuna Point, the northern extreme of the island, and on to Cape Põõsaspea [Spithamn Point] in mainland Estonia

The volume of the Gulf of Riga is approximately 424 cubic kilometres, with an average depth of roughly 26 metres. The annual freshwater river runoff into the entire Baltic Sea is about two percent of the total water volume of the Baltic (greatest in May and least in January and February), draining a land area nearly four times the size of the sea (1.7 million square kilometres). A shallow and narrow connection with the North Sea means that water resides in the Baltic Sea for about 30 years. These two factors combine to make the entire Baltic Sea one of the largest brackish water bodies in the world, with a salinity that ranges from one to two parts per thousand in the far north and east to about 20 parts per thousand in the Kattegat near the North Sea; salinity in the Gulf of Riga is fairly typical for the average Baltic salinity of about six to ten parts per thousand. In contrast, freshwater has a salinity of of less than 0.5 parts per thousand, and typical oceanic seawater above 30 parts per thousand. A saline stratification layer (known as a halocline) exists at a depth of around 70 m.

Raudsepp et al. have used a two dimensional hydrological model to describe the circulation characteristics of the Gulf of Riga. Wind-driven flow over variable bottom topography is the dominant process for the case of moderate to strong winds. The resultant double-gyre circulation mimics the gravest basin-scale topographic wave. This free topographic wave propagates cyclonically around the basin, but fails to complete a full cycle, due to the shallowness of the Gulf. Raudsepp et al. found that the topographic wave is reinforced by cyclonically rotating wind, but can be destroyed effectively by anticyclonically rotating wind. The topographic wave signature is more apparent in deep water and almost non-existent in shallow gulf waters. During calm periods or under the influence of weak winds, the double-gyre circulation transitions to a chiefly cyclonic rotation.

Principal rivers that discharge to the Gulf of Riga are the Daugava, Pärnu, Lielupe, Gauja and Salaca. Prominent islands in the Gulf are Kihnu, with and area of 16.4 square kilometres, and Ruhnu; both of these islands belong to the country of Estonia.

Harbour and forest edge of the Gulf of Riga
near Kuressaare on Saaremaa. @ C.Michael Hogan

The shallow Baltic Sea is essentially a fjord that is 1500 kilometres (km) long with an average width of 230 km. The sea is divided into basins and includes the Gulf of Finland, Gulf of Riga and Gulf of Bothnia. Large-scale meteorological conditions determine long-term fluctuations of salinity and temperature in the deep and bottom waters. Large pulses of North Sea water cause deeper areas to flip between oxic and anoxic conditions. The Gulf of Riga receives freshwater from river runoff.

The Baltic Sea large marine ecosystem as as whole and its catchment area have a range of ecotones and biological diversity. Its brackish waters contain a mixture of marine and freshwater species. The coastal areas serve as spawning, nursery and feeding areas for several species of fish. The Baltic Sea as a unit is considered a Class I, highly productive (>300 grams of Carbon per square meter per year) ecosystem. There are changes in the productivity of the near coastal and offshore waters from eutrophication. The traditional monitoring program for plankton used by the countries surrounding the Baltic Sea has proven to be unreliable in detecting rapid changes in the ecosystem e.g. toxic phytoplankton blooms and marked regional variations. Despite long-time observations, the dynamics of the system are not understood well enough to explain long-term changes or to make reliable predictions.

Wild horses along a coastal zone Latvian lake near the Gulf of Riga. @ C.Michael Hogan

There are also considerable wetland areas along the low-lying Latvian and Estonian coastal zones. These situations include not only extensive coastal marshes, but also large fen expanses and backshore freshwater lakes. These wetlands provide habitat for numerous resident and migrating birds, and a small herd of wild horses even inhabits one of the low-lying inland lakes along the Estonian coast between Riga and Kolka.

Living on the Gulf of Riga | Euromaxx deluxe

Day trip on yacht "Sparta", in the gulf of Riga

Metal Detecting.Search under water in the Gulf of Riga ...