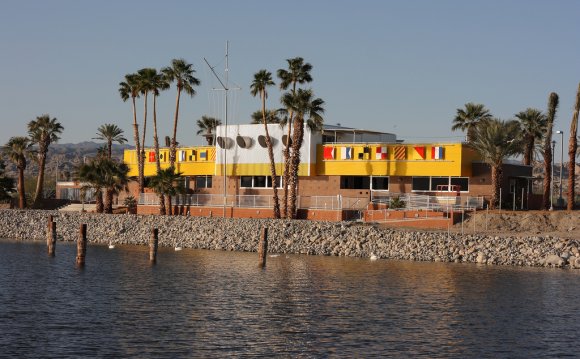 The or North Shore Yacht Club is an Albert Frey-designed building in North Shore, California.

It opened in 1959 as part of a $2 million development along the northeastern shore of the Salton Sea which would become California's largest marina. Several prominent figures from the entertainment industry docked boats there, among them members of The Beach Boys, Guy Lombardo, Jerry Lewis and The Marx Brothers. Ever-increasing salinity from agricultural runoff from both the Coachella Valley and Imperial County combined with fluctuating water levels culminated in a major flood in 1981, destroying the club's jetty and making it impossible for boats to dock at the club; it would be completely closed by 1984. However the club remained in use by the community into the early 1990s.

Like the majority of the buildings which surround it, the North Shore Beach and Yacht Club was abandoned and vandalized. The shoreside swimming pool remained intact though badly vandalized as well. An often-photographed large advertising sign for Texaco Marine at the site of the jetty has now been removed.

In July 2009, Riverside County supervisors approved the reception of a grant of $3.35 million as part of an overall package of $30 million to redevelop and restore the property. The property was listed on the National Register of Historic Places in 2015.

After closing in 1984 the abandoned Yacht Club was in a state of disrepair, as seen when this picture was taken, until its restoration in 2010

On May 1, 2010, the restored yacht club was reopened to the public as the Salton Sea History Museum, serving as a community center as well as a museum. The former pool area then served as an activity deck while the former loading area became a children's play area.

The museum was temporarily relocated to Mecca, California at the site of Desert Cahuilla Wetlands Temal Pa'lekish while awaiting a lease agreement from the county and reinstatement of its space in the yacht club. The following year the owner of the property, the Torres Martinez Tribe, opted to revoke the agreement in order to make use of the space remodeled by museum volunteers. As of 10-2014 the museum is still awaiting the long-promised lease agreement from the county to reopen in the yacht club.

The property that was the North Shore Beach and Yacht Club is owned by Riverside County, which made the decision to relocate the museum, and the property is now reserved for rare community events.