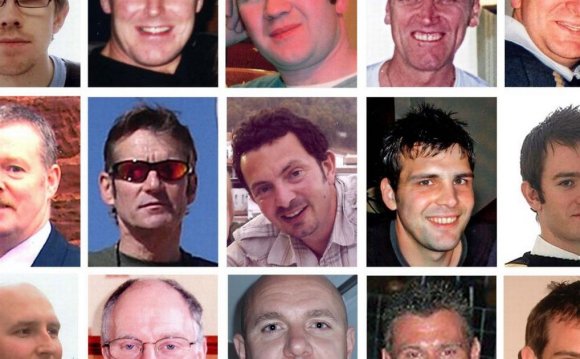 The involved a Eurocopter AS332L2 Super Puma Mk 2 belonging to Bond Offshore Helicopters, engaged on flight 85N, that crashed 11 nautical miles (20 km) northeast of Peterhead, Scotland just before 2:00 pm on 1 April 2009 in the North Sea while returning from a BP oil platform in the Miller oilfield, 240 km (150 mi) northeast of Peterhead. The crash killed all sixteen people aboard.

The helicopter was flown by Captain Paul Burnham and co-pilot Richard Menzies, both working for Bond Offshore Helicopters. Most of the victims were employees of KCA Deutag Drilling.

Bond also operated a very similar Eurocopter EC225LP helicopter which ditched in the North Sea on 18 February 2009, in which all 18 aboard escaped and were rescued.

The most serious previous North Sea helicopter accident had been the 1986 British International Helicopters Chinook crash, when a Boeing 234 Chinook crashed killing 45 people.

The search for survivors was called off on the evening of 2 April, rescuers admitting that there was no chance of finding anyone alive, and the Vigilant returned to Peterhead on 4 April. The 8 bodies found a few hours after the crash were taken to Aberdeen and on to a police mortuary.

The Air Accidents Investigation Branch (AAIB) chartered the seismic survey vessel Vigilant for its initial investigation, which arrived on site on 3 April, carrying specialised sonar equipment to locate the wreckage on the seabed. The aircraft was thought to be lying in approximately 90 metres of water, but as of 3 April the exact location was not known. No EPIRB beacon signal had been reported.

Grampian Police stated on the evening of 4 April that they had identified all the bodies. One of them, Nolan Goble, was the brother of former professional footballer, Steve Goble. A second vessel, the Diving Support Vessel Bibby Topaz, was chartered to assist the work, and sailed from Peterhead on 4 April, to recover the remaining 8 bodies that were not found on the surface, wreckage and the cockpit voice and flight data recorders.

The wreckage of the Super Puma was subsequently located on the sea bed in 100 m (330 ft) by the Bibby Topaz. The remaining eight bodies were recovered from inside the fuselage. The combined FDR/CVR was recovered and sent to the Farnborough headquarters of the AAIB for analysis, as was all the wreckage.

On 17 April the AAIB released a second report noting that metallic debris from the gearbox had been detected 34 flying hours prior to the helicopter crash. However, "no signs of an incipient gearbox failure were detected". In response, the EASA ordered an "urgent" inspection of the gearboxes on both the AS332L2 Super Puma and the EC225LP Super Puma. Helicopter operators were given to 24 April to complete the inspections.

On 16 July the AAIB published AAIB Special Bulletin: 5/2009 detailing further progress in the investigation, including two further safety recommendations 2009–74 and 2009–75. These respectively called on the EASA to urgently review the manuals on magnetic particle detection and on planetary gear inspection.

On 24 November 2011 the AAIB published its Formal Report 20/2011 into the accident. The cause of the accident was attributed to the catastrophic failure of the Main Rotor Gearbox as a result of a fatigue fracture of a second stage planet gear in the epicyclic module.

Seventeen Safety Recommendations were made as a result of the investigation.

On 13 March 2014, an official UK government inquiry found that the accident could have been prevented if maintenance procedures had been correctly followed.

Survivors of North Sea helicopter crash are stretchered on ...