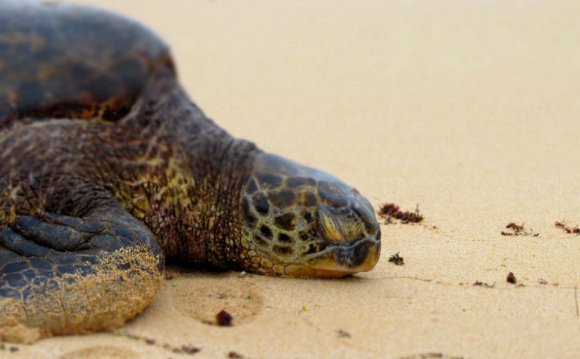 Important: I wrote this post over a year ago now but things have changed! Locals are telling me that there is a lot of disrespect for the turtles space and that the beaches are quite busy now. I went back and forth about whether I should remove this post but ultimately decided to keep it as this is my role, showing my readers where the best spots are to go. BUT and it is a huge but, we need to be respectful! Please keep a reasonable distance, never follow them around, and never, ever touch. Our bacteria can hurt them and theirs can hurt us not to mention how distressing it can be for the turtle. Use common sense, if the beach is busy try to come back at a later time. Respect the local community, beach, and wildlife at all times! If you find a turtle in distress do not approach, like we mistakenly did, but rather call (808) 725-5730 and report it!

One of the things we enjoy immensely as we travel the world is interaction with local wildlife. When we heard there was a beach here on Oahu that you were practically guaranteed to see sea turtles we decided to head out and explore it.


I looked on a map, brought the map, and had a GPS and I have to say it was nearly impossible to find on my own. We stopped at about 15 different beach areas and drove back and forth around the area we knew it had to be in. We crept down small alley paths, we had to endure fussing and general crabbiness after the first hour lapsed and we even stopped to ask directions at least 5 times to no avail. Finally, we found the right woman to ask and 2 hours after leaving the house we stumbled onto the beach.

What we discovered when we finally arrived though was pure bliss. A beautiful yet very small beach full of sea turtles. One lazed on the beach while at least 4 others swam in the water just off shore coming in to ankle deep water to feed. We sat on the beach about 20 feet away from this massive sea creature admiring its beauty. Then we waded in the ocean to discover many more turtles, beautiful fish, and we even spotted an eel.

We were inspecting the turtle as he had a hook in his mouth and we wanted to help. I snapped a quick pic but it is definitely NOT Ok to get this close! We called the authorities and they assured us it happens often and the hook will fall out on its own!


The beach it self is small but lovely with fluffy white sand and some great tide pools and rock ledges to explore. The surf is a bit rough with a moderate undertow but nothing terribly dangerous. The mountains behind the beach gave a stunning backdrop and the lack of a substantial amount of people was refreshing after spending many days at Waikiki beach where every inch is spoken for. Apparently the evenings and weekends get more busy as this is a real locals beach but even as the sun set there were maybe 2 other families there.

This little guy just kept following us around! We never get this close unless they are approaching us!


I felt a bit nervous encroaching on the beach with so few people around and houses right there but they welcomed us. The parents inquired as to how we were enjoying Hawaii while the kids threw a football with my boys for hours.

One of the dads helped show us where the turtles were swimming and led Dylan around showing him some of the underwater world, it was wonderful.

At the end of the day we decided to stay and watch the sunset, which was spectacular from that vantage point on the island but perhaps the most amazing part of the day was just before we left. As I was looking out towards the horizon I spotted a very large humpback whale breaching the surface. He continued to breach 5 more times. Our excitement bubbled over and we yelled and pointed, crying out in total awe and happiness. None of us had ever seen a whale in the wild and since whale season is Dec-April I had sort of written off seeing any while we were here for the summer! It was breathtaking! The few local people on the beach may have thought us a bit mad but what can you do, it was a huge whale and to us that needs a show of total excitement.


As we drove home, chatting and thinking about what an amazing day it turned into we realized 2 things. One was that persistence pays off. Had we given up after the first hour then this amazing day would never have come to fruition. The second was just how important wildlife is to us. It awakens our spirits and has the ability to turn any energy to a positive and glowing light inside ourselves. The kids and I all feel it and are starting to recognize that it is wildlife encounters that we most want to have in the world. They are true gifts from nature and we never want to take it for granted.

We feel extraordinarily blessed today and hope to have a lot more days like it here in Hawaii!
How to get there
The beach is easy to access it is just a matter of knowing where to go. The "turtle" beach has no signs and most people will tell you they have no idea where it is and try to direct you to Turtle Bay, which is no where near the same thing. So with these directions you should be able to find it with no trouble at all. Head West down the H1 highway where at the end it will turn into a smaller road, rte.93. Follow this road down until you reach the large town of Wai'anae. Once you pass out of town you will be heading towards Makaha.

After you pass a large beach park on the left you will see a lone sky rise called Makaha Beach Cabanas. After passing the cabana hotel you want to take your 3rd left onto Upena Street. You will quickly hit a T in the road where you want to take another left to stay on Upena. On the second curve (as the road comes down on to the beach) is where you will find the beach access path. It is diagonal and between 2 houses. Park where you can and head down the path and there you are. You will most likely see a turtle right away lazing in the sun. Remember do not approach them. Bring your zoom lens, keep at least a 20 foot distance, and enjoy!


There are other turtle beaches like Laniakea but they are more busy, more regulated, and seem to be less an authentic experience. I highly recommend heading to the beach I give directions to here. It is bound to be an real treat plus it is a less visited area of the island but a really lovely section!