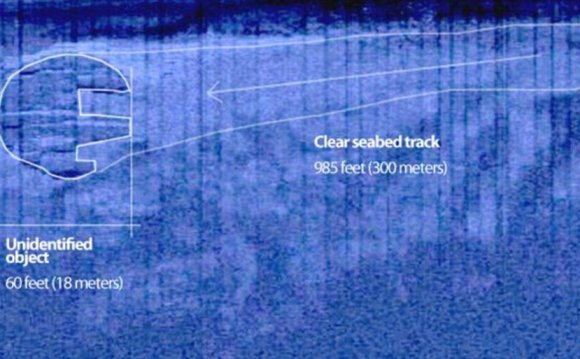 Closeup of sonar image of the anomaly on the seafloor.
Credit: YouTube | MysteryHistorydotTV

"The sonar image has numerous artifacts in it that make it difficult to interpret, and I would not place too much confidence in any interpretation until a better processing is done and the details of the type of sonar and particulars are provided, " said seabed sonar-scanning expert Dan Fornari, a marine geologist at the Woods Hole Oceanographic Institution in Massachusetts. "I'm saying the data are lacking in resolution, detail and quantification."

The expert analysis suggests this is just a glacial deposit that the Ocean X Team "discovered" in a low-resolution sonar scan. Widespread media coverage, fame and a worldwide Internet following have since ensued. Lindberg laments the fact that no organizations will sponsor his investigation. Some organizations have supposedly told him funding the dives isn't worth their time because the anomaly "might be something very unexplainable." He asks people to support his and his fellow divers' work by purchasing apparel from the Ocean X website.