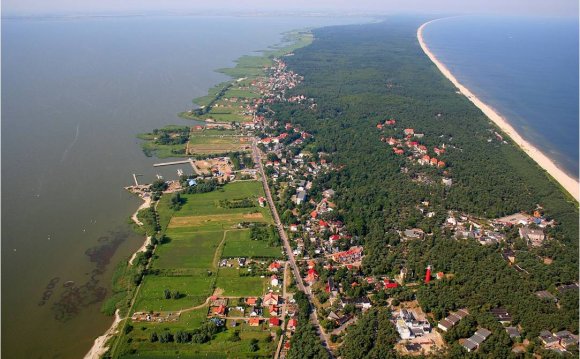 It has been commonly accepted that the Vistula Spit starts at the level of Mikoszewo, a village situated near the Śmiała Wisła estuary, on its right side. Actually, however, it actually starts between Sopot and Gdańsk and extends in the form of a sandy ridge to Baltiysk in the Russian Federation.

We are focussing on the area from Mikoszewo to Piaski. Its eastern part separates the waters of Gdańsk Bay from the Vistula Lagoon. This body of water is a key element contributing to the touristic attractiveness of the region and its unique landscape. It is perfect for water tourism, which is supported by a well-developed sailing and windsurfing infrastructure. The connection, through waterways, with the Vistula and Żuławy, gives this area an unprecedented potential for inland-water tourism (the Żuławy Loop).

From the side shore of Gdańsk Bay stretch beautiful wide beaches, ranked among the best in this part of Europe. The beaches of the Vistula Spit are famous for amber, which has been associated with this place for centuries. In recent years the narrow-gauge railway has enjoyed great popularity. It is an attraction that may easily aspire to become the trademark tourist product of the Vistula Spit.

The major location in the Vistula Spit is Krynica Morska. With more than 1, 300 permanent residents, it is the smallest town in Poland. This is not to understate its position on the tourist map of Pomerania. Beyond doubt, it counts among the most attractive bathing sites at the Polish seaside. The features of Piaski, the last village on the Polish side of the Spit, are altogether different. It is a place for those tourists who prefer peaceful leisure. West of Krynica lie the small resorts of Przebrno, Skowronki, and Kąty Rybackie. It is worth looking for the stone posts which marked the border between the Free City of Danzig and Germany in the interwar period. Kąty Rybackie boasts the natural attraction that is the cormorant reserve – the largest refuge of this species in Europe.

The second most important place after Krynica is Stegna. It is a typical summer resort with numerous leisure facilities and a good infrastructure for recreation by the sea. The neighbouring Sztutowo is a viable alternative to the often overcrowded Stegna. Tourists are choosing this place more and more often, as they appreciate the peace and the wide and clean beach. Sztutowo is known mainly as the location of the former Nazi concentration camp from World War II, now a museum.

The western part of the Spit features the villages of Junoszyno, Jantar, and Mikoszewo. The local beaches are famous for the abundance of amber, which is why every year Jantar hosts the finals of the World Championships in Amber Collecting.

The Vistula Spit offers unlimited leisure opportunities. Aside from its gorgeous beaches, it boasts extraordinary natural assets, and perfect conditions for water, horse, and bicycle tourism, as well as some treats for historic building enthusiasts.

Having fun with my BMW E34 at Vistula Spit (Kaliningrad ...