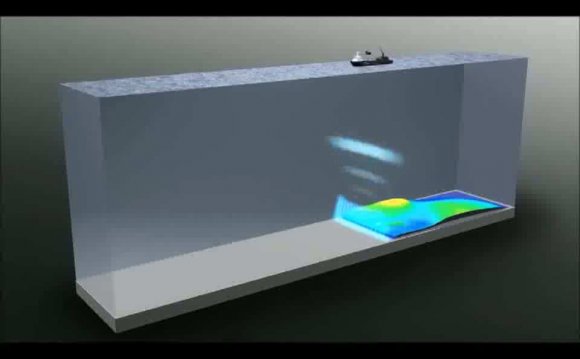 Material is very hard, not simple stone, described as “preserved rock”. Hogeborn describes the sense of carbonized material.
The object has rounded sides with rugged edges (not smooth). “It’s like someone has pinched the mountain at the edge, as if you have moulded together two molds, and it sticks out stones between the molds”, - Stefan Hogeborn. “We can see this phenomena at several different points on the anomaly. It appear to occur where we have these structural corridoors, cracks and such things.” – Peter Lindberg
There are two round holes in the circle. One is 30 cm wide, and the other is approx. 2 meters wide and surrounded by a square formation of 2 x 2 meters.
There are not only straight lined formations on the circle, there appear to have construction lines and boxes drawn on it.
90 degree angle corridors 1.5 meters in height and 3 meter wide, which are cut into the object.
Divers said there was a “blackish” powder that had been attracted to the cameras.
Looks like something has been very hot down there, so that the stone has melted. Dennis believes this to be true because “some stones look like their up side is burned. Also the blackish material which looks like it has been poured out gives the sense that it might been some heat down there.” – Peter Lindberg, July 4, 2012“The surface of the (circular) object has cracks in it in some places 1-2 inches wide, and in these cracks, it looks like something has poured out like magma…If the magma had come out before the ice age, it should have been scraped away by the ice, but now it’s there like it poured out yesterday.” – Earthfiles interview with Peter Lindberg ” As you understand it is very much in this that points toward this not being just a “stone formation”. “The cracks seams not to be irregular, they seams to go vertically or horizontally. Behind them you can see a blackish colored mineral(?) with the structure of old wooden planks.” – Peter Lindberg, June 21, 2012
Dennis said that a volcano is possible, however according to researchers, there has never been a volcanic activity in the Baltic Sea. Also, the object they found doesn’t look like a volcano because of the perfect circular form of it and also because of the 90 degree angles. Peter Lindberg, on the other hand feels they have found volcanic activity (see below) and this volcano-like mountain (approx. 2 km away from the anomaly) will be looked at on their next expedition.
Source: beforeitsnews.com