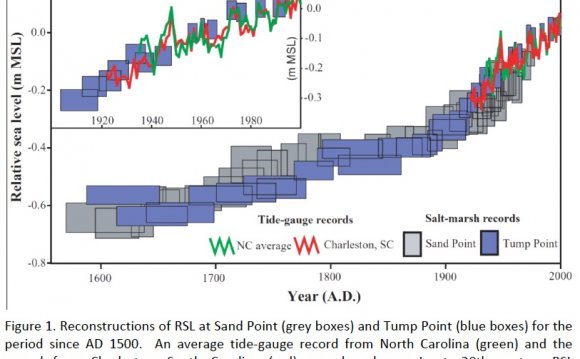 A new scientific report warns that the sea is rising at widely varying rates along the North Carolina shore – ranging by 2045 from a possible low of 4 inches at Southport to as much as 12.1 inches on the northern Outer Banks.

The N.C. Coastal Resources Commission requested the 30-year forecast, released Wednesday in draft form, after the General Assembly rejected a 2010 report and ordered a moratorium on new regulations and plans related to sea-level rise.

North Carolina becomes the first state with a comprehensive forecast that shows the sea rising at different rates along its coast. Scientists have known for years about big differences – shaped by forces in the ocean and deep in the earth – between the northern Outer Banks and North Carolina’s southern shoreline.

Tide gauges show that the ocean has risen faster in recent decades at Duck, north of Nags Head (about 4.5 millimeters per year) than farther south at Wilmington and Southport (about 2 mm per year – close to the average annual global rate of 1.7 mm).

The northern Outer Banks are sinking slowly. This corner of the state lies in a part of the North American continent that is subsiding in response to geological forces dating from the last Ice Age, about 200 centuries ago.

In addition, oceanographers have spotted a link between fluctuations in the Gulf Stream – its strength and position offshore – and different rates of flooding and sea-level rise along the U.S. coast. This great ocean current is weakening and slowing down, and scientists say the change is pushing the seas higher along the mid-Atlantic coast north of Cape Hatteras.

The 30-year forecast was produced by the Coastal Resources Commission’s advisory science panel. East Carolina University geologist Stan Riggs, a panel member, said state leaders should start dealing with the effects of coastal storms whose impact is magnified by the rising sea.

“If you’re going to build sewage plants or hospitals or highways, you’d better be thinking about the longer term, ” Riggs said Wednesday. “How many mom-and-pop businesses out there (on the Outer Banks) have failed this year because Highway 12 has been broken or under water? It has been happening more frequently, under less-stormy conditions.”

That may put North Carolina behind other state and local governments along the East Coast that are adapting to sea-level rise by updating their zoning rules, construction elevation requirements, infrastructure plans and other policies. Many science organizations have warned that global warming is speeding the pace of changes that might push the ocean as much as 3 feet higher by the end of this century.

North Carolina’s science panel was attacked by coastal developers and Republican legislators after it warned in 2010 that the state should prepare for a 39-inch sea-level rise by 2100. That prompted the legislature to order the new forecast.

Under the General Assembly’s guidelines, the science panel considered whether the seas will rise more slowly in future years, continue rising at current rates, or rise faster in response to climate change. The panel concluded that any deceleration of sea-level rise is unlikely.

Conservative critics have argued that the rate of sea-level rise will continue unchanged. They dispute predictions from scientific organizations in several countries, and from the Intergovernmental Panel on Climate Change, that warming waters and melting glaciers will accelerate sea-level rise in coming decades.

In its new report, the North Carolina science panel shows what will happen if the rate of sea-level rise is unchanged over the next 30 years: an increase ranging from about 2.4 inches at Southport to about 5.4 inches at Duck.

But the report does not endorse this prospect. It focuses instead on the likelihood that the seas will rise faster and faster in coming years. The forecast is based on a range between two different scenarios, laid out in international climate change reports, for mild or heavy greenhouse gas emissions.

Frank Gorham III of Figure Eight Island, the Coastal Resources Commission chairman, sought to avoid a repeat of the controversy surrounding the earlier 39-inch forecast when he laid out rules for the new report last summer. He rejected calls from critics to replace the original members of the science panel, and he reduced the scope of its new forecast to 30 years.

“We have to do a better job this time of listening to both sides, instead of just throwing it in the trash and saying it’s terrible, ” Gorham said Wednesday. “Read the thing and listen to people.”

The new draft report will be reviewed by a pair of sea-level scientists from out of state: Robert G. Dean, a former civil engineering professor at the University of Florida, and James R. Houston of Vicksburg, Miss., a former research director with the U.S. Army Corps of Engineers.

Then Gorham is expected to order a second report requested by the General Assembly: a study of the economic and environmental costs and benefits of developing coastal regulations based on the sea-level forecast.

North Carolina bans use of science based sea rise models