Whales in the North Sea 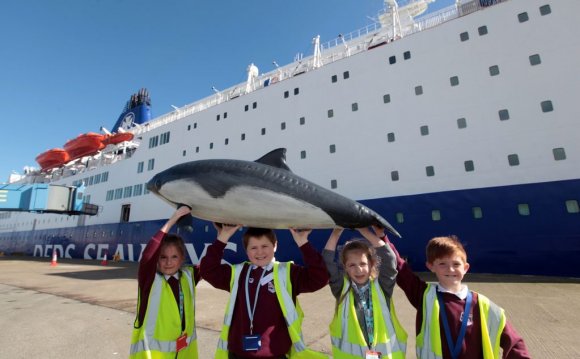 A minke whale – one of the species being more commonly seen in the North Sea. Photograph: Murdo Macleod

The North Sea, by reputation grey, cold and empty, is becoming one of Europe's more desirable whale and dolphin-watching places, with sightings at record levels.

This year, passengers on the King Seaways ferry that runs daily between Newcastle and Amsterdam made a record 699 sightings in the five months to 5 September, four times as many as 2011 and over three times as many as 2012. Minke whales, four species of dolphins, harbour porpoises, sharks, seals, and even a humpback whale were spotted.

But wildlife experts from the charity Orca, who accompany most North Sea crossings and verify the sightings made by passengers, say that it's unlikely that the heavily fished sea is actually more populated with cetaceans than in previous years, and more likely down to increasing numbers of observers.

"We think it's a case of the more eyes the better, " said Alison Lomax, head of Orca's North Sea wildlife programme. "At times we have had 30 or more people scanning the sea from the bows of the ferry. People are now much more aware of wildlife. So they look more and see more. We've had evenings when whole pods of dolphins have been turning up, and we have sightings every few minutes."

Whale and dolphin boat trips are now thriving tourist industries in Cornwall, Wales and Scotland, but few operate out of the North Sea, which is traditionally rough. Whale watching boats work out of Whitby but going by ferry across the North Sea appeals, it seems, because watchers can always pop indoors when they like for a cuppa when it inevitably rains. The best sightings this year have been 30km off Flamborough Head in Yorkshire.

"You really don't think of the North Sea as somewhere which is full of wildlife. But it has been really speactacular. There's loads to see. You would be very surprised, " said Lomax.

This year's good weather is thought to have helped, too. "Porpoises and dolphins don't spout so they are really only seen when it's calm. They are really hard to spot in bad weather. The amazingly calm weather has had a huge impact on the number of animals we have seen. This summer we were treated to mirror-calm seas, making the animals much easier to spot."

The sightings complement the official scientific surveys that are carried out by wildlife officers from Orca who travel on the ferry twice a month. "The passengers provide casual data, but it's incredibly important in helping us to monitor the presence of whales and dolphins in the North Sea, " Lomax added.

Autumnwatch: Orcas in the North Sea