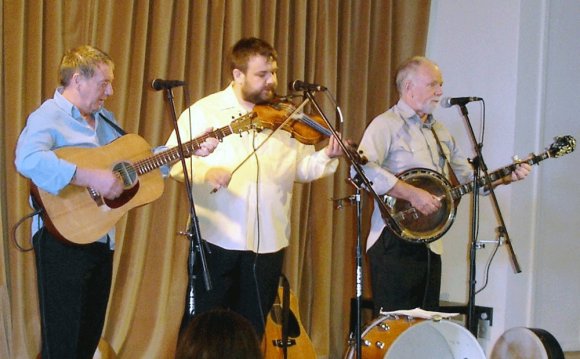 Over thirty-five years and stronger than ever!! "North Sea Gas" is one of Scotland's most popular folk bands with great vocals and tremendous three part harmonies. Guitars, Mandolin, Fiddle, Bouzouki, Harmonica, Whistles, Bodhrans, Banjo and good humour are all part of the entertainment. They have received Gold and Silver Disc awards from the Scottish Music Industry Association and regularly have sold out shows at the Edinburgh Festival Fringe!!

They have released 19 albums with "Fire in the Glen" being the most recent and are constantly adding new material to their shows. Their prior album, "The Fire and the Passion of Scotland" won the 2013 Album of the Year award from Celtic Radio in the U.S. as well as first place in the "Jigs and Reels" category for the set of tunes on the album. All of their previous albums continue to be very popular with fans all over the world evidenced by the Scottish Music Industry Association awarding FOUR awards in October 2014 for: "Dark Island" (gold); "Lochanside" (silver); "Glencoe Massacre"(silver); "Edinburgh Toon"(silver).

Their show, and their albums, consist of traditional, contemporary and self-penned material put together in a style all their own. This proves popular during their regular tours of Scotland, America, Canada, Germany, Austria, Estonia, Turkey, and many other destinations both in and outside of their home in Scotland. Every year there are appearances on TV and Radio on both sides of the Atlantic including "Late Night Saturday, " "Woodsongs Old Time Radio Hour" (one of the biggest radio shows of its kind in the USA), and "Song of the Mountains" shown on select PBS (Public Broadcasting Service) TV stations in the U.S.

In the past the band recorded for Chinese television with an estimated audience of 800 million, played in Istanbul, Turkey for the British Consulate, and recently had the honor of performing at the famous Rosslyn Chapel.

In addition to regular tours abroad, they have taken their show to theatres, arts centres and community halls around Scotland. Touring and seeing their native land is something the band really enjoys.

We could say more but put simply "North Sea Gas" are a highly entertaining Scottish folk band who have an ever-growing fan base ranging through all age groups thus giving the "Gas" shows a wonderful atmosphere and universal appeal.

HERE'S WHAT PEOPLE ARE SAYING ABOUT "NORTH SEA GAS".

"The band displays an attachment and a reverence for their roots from the very start. The music feels genuine, unpretentious and spontaneous, with a fondness for storytelling and beautiful harmonies." (Celtic Radio - Boston)

".they inherit the mantle vacated by The Corries and The McCalmans with tight vocal harmonies and well-chosen material.provide a solid well-honed sound vocally strong and musically complimentary.most commendable about North Sea Gas is their ability to balance up tempo material with quieter more thoughtful moments and treat each with commitment and professionalism. "Fire in the Glen" is an excellent showcase for their talents and shows them taking the Scottish ballad group mantle with fire and grace."
John O'Regan Freelance Music Journalist, Broadcaster, Lecturer

Dave Gilfillan, founding member of North Sea Gas, is originally from Edinburgh, Scotland where his interest in music started at an early age. He first learned how to play the guitar as a teenager and frequented folk clubs where he was fortunate to have met many early pioneers of the folk music scene in Scotland. He plays guitar, banjo, mandola, bodhran, foot drum, harmonica and whistle. Dave has built up a reputation for rousing sing-along vocals and big heartfelt ballads. Add to that a sense of on-stage fun and tongue-in-check humor and you can see why his brand of folk music has taken him, and North Sea Gas, all over the world. For him, to sing on stage seemed a natural thing do to.

Ronnie McDonald, is originally from Glasgow, Scotland, lived in Australia for many years, but now lives in Edinburgh. "Mac, " as he's also known, has been invovled with music and in bands most of his life. He joined the band in 2002. He plays guitar and bouzouki and sings both lead and harmony vocals.

Grant Simpson, originally from Lossiemouth in the northeast of Scotland but now also living in Edinburgh, has been playing fiddle since he was a very young child. He is the youngest member of North Sea Gas, joining them in 2006. Besides playing fiddle he also sings harmony vocals, the occasional solo, and plays guitar, bouzouki and mandola.
Source: nsg.gplrank.info